And a black composer for you!

Black History Month - What we don't know and are not taught: "Black Mozart"

Joseph Bologne, lived during the era of the American Revolution, 1745 -1799. He was French, the son of a slave mother and a wealthy planter father. His father essentially bought a title in 1757, and had taken his son to France for his education, along with his mother who continued to be a slave. He excelled in swordsmanship. He was SO unusual, so excellent at this skill, that when he graduated he directly became a member of the King's bodyguard, and was knighted. He also fought duels with prominent swordsmen who insulted him because he was bi-racial.

An obvious polymath, Saint-Georges was also an accomplished violinist at an early age (hence the comparison to Mozart) and became an accomplished composer in his own right as well. Saint-Georges was subsidized during his younger years by his father, but that money went to his apparently white and legitimate half-sister when his father died, leaving Saint-Georges to support himself by what he earned from his music and from the Orchestras he conducted. He continued to enjoy both tremendous popularity, but also periodic racism against him. He became a great favorite of Marie Antoinette. Saint-Georges began writing operas, met other famous talents in the music world, including the actual Mozart and Haydn. During this time his mother, who had continued to live with him, died - apparently still at least technically a slave by legal status if not in how she lived.

Subsequently, Saint-Georges spent time in England, including rubbing elbows with the Prince of Wales. Throughout his life among the nobility and wealthy, Saint Georges was an ardent supporter of the abolition of slavery.

When the French Revolution began, Saint-Georges volunteered, and headed up a legion of 'colored' troops, holding the rank of colonel. He fought on the side of the Republic against the monarchists, was imprisoned during the 'Terror', was released when the worst excesses of the Revolution were over. Without the patronage afforded him by the nobility prior to the revolution, he was somewhat less successful.

At one point he left France for about two years when there was a slave revolt on Caribbean island where he was born. Two years later he returned to France, again tried to rejoin his legion and again began composing and conducting music, as well as resuming playing the violin. He died in 1799 in comparative poverty.  He left behind as his legacy a large body of musical compositions, including operas, symphonies, concertos, chamber music, music for string quartets, and vocal music, many of which are still performed and recorded.

And he was also a character in the TV Show Nicholas Le Floch (Le Dîner de Gueux)!

A Black Author for you! 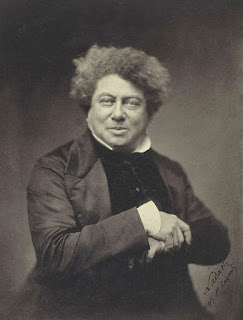 Next time the Politically Correct crowd want you to read a "black author" tell them you are a fan of Alexandre Dumas.

And the more European the title sounds the better, but any of the Three Musketeers/The D'Artagnan Romances series (The Three Musketeers, Twenty Years After, and The Vicomte of Bragelonne: Ten Years Later) would be the best bet.  There was a reason the BBC cast a mixed race actor to play Porthos in their version of the books.

Alexandre Dumas, AKA Alexandre Dumas père, author of The Three Musketeers and The Count of Monte Cristo (and father of Alexandre Dumas fils, who wrote La Dame aux Camélias). Alexandre père's father (or, if you prefer, the père's père), General Alexandre (Alex) Dumas, was black Haitian, the son of an aristocratic French father, Marquis Alexandre Davy de la Pailleterie, and a freed slave, Marie-Cesette Dumas. Toss in that the father was a general in Napoleon's grande armée!

The writer's father's dad sold the boy as a slave to pay for his passage to France (that's remedial parenting classes for you, Marquis de la Pailleterie) before buying his freedom. Later, Alex rose through the ranks of the army to become a general before he was 30. He was so effective that that the Austrians called him Der schwarze Teufel ("the Black Devil"). During the French revolution fought with other black men in a unit called the African Legion.

Study up on this French writer and have a great time challenging people's stereotypes on race.
Posted by Laci The Dog at 8:19 AM No comments:

I've been a fan of Neil's for a long time now. I'm glad to see he's now on Patreon.
Posted by Laci The Dog at 5:48 PM No comments:

OK, I didn't vote for John Fetterman in the last Pennsylvania Election (FYI one one emmigrates from the US, one votes in the last place they were domiciled--it seems I am currently stuck with Philadelphia due to bureaucratic BS). I don't like him for a variety of reasons, but I also Demexited in 2016 and haven't looked back on the duopoly since. I'm not going to get into why I dislike the "Berners" who have remained within the Democratic Party other than to say that I dislike them.

I voted Green in 2022 even though Dr. Oz was not my type. Although, I was walking around singing "Arc en Ciel" the day of the election...

My point, My vote for Jill Stein in 2016 didn't change the election result, the electoral college did that. And the Russians had nothing to do with that, unless you want to tell me that Catherine the Great promised the Continental Congress a "Donkey Show" a few centuries later on.

My Green Party votes haven't changed the results since the duopoly pretty much runs things for the time being in the US. And no matter what Fox news tries to tell people, there really isn't that much of a difference between the two parties.

Seriously, if the "Democrats" really were socialists, they would have run Sanders in 2016 (and 2020) and won.

Electoral college or not.

But the duopoly doesn't want that to happen. And anyone who remains within the duopoly is a traitor to the movement behind Bernie.

The Real Reason to be Afraid of Artificial Intelligence | Peter Haas | T...

I definitely agree with this: AI needs to be taken with careful skepticism. My car can pretty much drive itself, but I wouldn't trust it to drive anywhere without me having a veto power over what it does.

Lets toss in mistakes Siri and other voice recognition systems make. I used to collect them, but they became overwhelming.

AI cannot be trusted blindly, but it can help make life better when used WITH a human check on the system.

'We the People' - the three most misunderstood words in US history | Mar...

Like it or not, the US Constitution, and the Declaration of Independence, are anything BUT popular documents. It was written in secret by a select group of people. Sure, there were debates, but they were anything open and above board until after the document was written. People forget that some people, the anti-Federalists, were against ratification of the constitution.

I don't totally agree with his analysis (the pronouns bit is anachronistic as heck), but he does make some very good points.