If Wolff and Bannon are to be believed — and so far, there is no reason not to — Trump didn’t want the job. His team wanted him to lose. “Once he lost, Trump would be both insanely famous and a martyr to Crooked Hillary,” Wolff writes. “His daughter Ivanka and son-in-law Jared would be international celebrities. Steve Bannon would become the de facto head of the tea-party movement. Kellyanne Conway would be a cable-news star. Melania Trump, who had been assured by her husband that he wouldn’t become president, could return to inconspicuously lunching. Losing would work out for everybody. Losing was winning.”
Wanting to lose explains Trump’s refusal to contribute to his own run. It explains his barebones campaign, with its weird lack of field offices, his sleepy national HQ and his cheapskate approach to TV ads. The dude ran for president yet refused to spend the night in a hotel room. 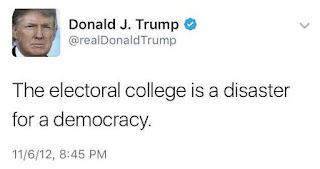 I have been wondering if the game plan was that Clinton would lose the popular vote, yet win in the electoral college.  That would have led to an uproar from the right.

Unfortunately, people are talking about everything except for what really went wrong in the last election.

The real issue here is that the US needs to take a time out to seriously examine its political climate.

Another thing from Ted:


The second takeaway here is that Hillary was an even worse candidate than her biggest detractors (cough cough) believed. Ruminate on this: she lost to a man who tried to lose...So think on that a while. Hillary Clinton was so sucky that she lost to the suckiest, stupidest, losingest candidate anyone ever dreamed of.

That's bad if someone who intended to lose actually won against someone who thought she had the game sewn up to win.
Posted by Laci The Dog at 8:54 AM