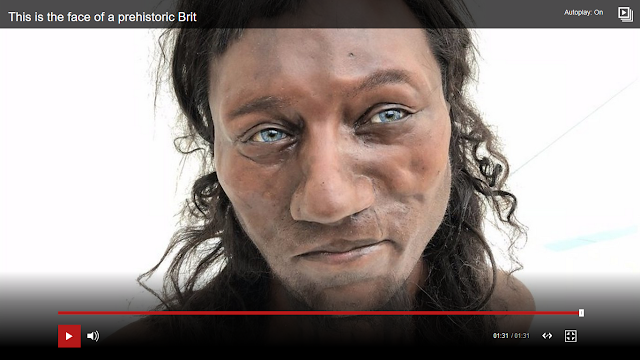 Too bad that isn't true.

Scientists have reconstructed his appearance based on 3D scans of the skull and information from the man's DNA and came up with the above image.

This changes this beliefs about Early Europeans:


It was initially assumed that Cheddar Man had pale skin and fair hair, but his DNA paints a different picture, strongly suggesting he had blue eyes, a very dark brown to black complexion and dark curly hair.

The discovery shows that the genes for lighter skin became widespread in European populations far later than originally thought – and that skin colour was not always a proxy for geographic origin in the way it is often seen to be today.


Tom Booth, an archaeologist at the Natural History Museum who worked on the project, said: “It really shows up that these imaginary racial categories that we have are really very modern constructions, or very recent constructions, that really are not applicable to the past at all.”
Yoan Diekmann, a computational biologist at University College London and another member of the project’s team, agreed, saying the connection often drawn between Britishness and whiteness was “not an immutable truth. It has always changed and will change”.


I really wish Pioneer Little Britain Europe hadn't banned me from their face book pages because I would post this every place I could.