A militarised police is nothing new...outside the United States 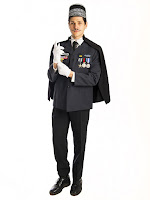 The term "Gendarme" may connote the quaint French Policeman like the one in this picture.

The mobile being an internal army, quite literally. main responsibilities are:
Nearly 20% of the Mobile Gendarmerie squadrons are permanently deployed on a rotational basis in the French overseas territories. Other units deploy occasionally abroad alongside French troops engaged in military operations (called external operations or OPEX).

Let's toss in the the Gendarmerie Nationale also has the Groupe d'intervention de la Gendarmerie nationale (GIGN), an elite law enforcement and special operations unit numbering about 400 personnel. Its missions include counter-terrorism, hostage rescue, surveillance of national threats, protection of government officials and targeting of organized crime. GIGN is one of the world's top Special Forces groups, which is something that would make people who get upset about armed police to go apoplectic and die.

And the Gendarmerie Nationale's history goes back to the Maréchaussée of the middle ages. Maréchaussée, or Marshalcy.  During the middle ages there were two Grand Officers of the Kingdom of France with police responsibilities: The Marshal of France and the Constable of France. The military policing responsibilities of the Marshal of France were delegated to the Marshal's provost, whose force was known as the Marshalcy because its authority ultimately derived from the Marshal. The Marshalcy dates back to the Hundred Years War, and some historians trace it back to the early twelfth century. Another organisation, the Constabulary (French: Connétablie), was under the command of the Constable of France. The constabulary was regularised as a military body in 1337.

Gendarme means Man at Arms. So the Gendarmes were the "men at arms" of the Middle Ages. The term was more specific than just men who had weapons, but were government officials.

Also, France's Gendarmerie has been highly influential on other national police forces, mostly in civil law and former French Colonies.
Posted by Laci The Dog at 10:46 AM