From the BBC World News:

A 26-year-old US citizen has been arrested for allegedly plotting to fly explosive-packed, remote controlled planes into the Pentagon and the US Capitol in Washington.

Rezwan Ferdaus was also charged with attempting to supply materials to al-Qaeda and aid attacks on US soldiers. The Northeastern University physics graduate is accused of planning to commit "jihad" since early 2010. Mr Ferdaus was arrested in Boston after an undercover investigation by the FBI. Attack supplies Announcing his arrest, the US Department of Justice described an elaborate operation over a period of months leading up to the arrest of Mr Ferdaus. Authorities said he designed and supplied undercover operatives with a total of eight mobile phone detonators intended to be used by al-Qaeda operatives to set off bombs in the Middle East. “The public was never in danger from the explosives”- Carmen Ortiz US attorney

During a June 2011 meeting, Mr Ferdaus was told that his first phone detonation device had killed three US soldiers and injured four or five others in Iraq. "That was exactly what I wanted," he reportedly told the undercover agents.
Also during 2011, Mr Ferdaus began speaking to the agents about his desire to organise an attack on the Pentagon, home of the US military, and the Capitol building in Washington DC, seat of the US Congress. Posing as accomplices, they then supplied him with C-4 explosives, a remote-controlled plane and arms. Mr Ferdaus was arrested on Wednesday immediately after putting the newly delivered weapons in a storage container, the FBI said. 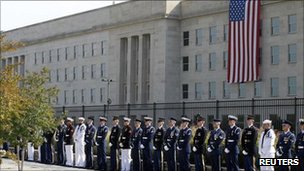 The Pentagon was previously attacked in 2001 when the 9/11 hijackers flew a plane into the building
"The conduct alleged today shows that Mr Ferdaus had long planned to commit violent acts against our country, including attacks on the Pentagon and our nation's Capitol," US Attorney Carmen Ortiz said. However, Ms Ortiz, US Attorney for Massachusetts, added: "The public was never in danger from the explosives," which were controlled by undercover FBI employees. If convicted, Mr Ferdaus could face up to 15 years in jail for providing support and resources to a foreign terrorist organisation and up to 20 years in prison for attempting to destroy national defence premises. Richard DesLauriers, Special Agent in Charge of the FBI's Boston Division, said law enforcement agencies in the area had worked together to "detect, deter, and prevent terrorism". "We have an obligation to take action to protect the public whenever an individual expresses a desire to commit violence," he said.
Posted by dog gone at 9:26 AM