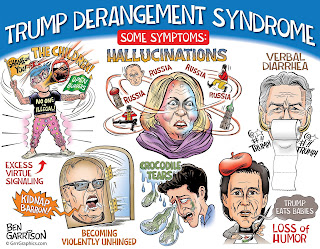 OK, I'm going to preface this by saying I'm no fan of Donald Trump.

On the other hand, you may know people who start frothing at the mouth at the mere mention of the "Cheeto" if they are left of centre.

There is a right wing manifestation as well which thrives on making the aforementioned people cringe. The ones on the right will support Trump because it makes the left leaners act in the manner depicted.

For the Left, Trump can do nothing right and is up to no good. It is their hope he will somehow be impeached, which isn't very likely.

Ted Rall hit the nail on the head with his definition:


“Trump Derangement Syndrome” is when you have so much anger and rage at President Trump that you are willing to do anything, no matter how stupid or reckless or dangerous, to try to get him out of office by hook or by crook. Lately I’ve been hearing Democrats say that they’re hoping that the economy head south, as if they didn’t live in the economy themselves. Others want him to attack Iran so that people angry at the war don’t vote for him for reelection. This is crazy talk


The recent incident with Turkey announcing it would be making bombing raids in Syria to push back the Kurds demonstrates how this all works.

I would put that most people who were upset by this know next to nothing about the Kurds: a stateless people who mostly live in Turkey, Syria, Iraq, and Iran. They also don't know that Turkey has been participating in airstrikes against ISIL alongside the U.S.-led coalition, but also actively supporting the Syrian opposition and occupying large swaths of northwestern Syria while engaging in significant ground combat with ISIL, the SDF, and the Syrian government since August 2016.

SDF if you didn't know is The Syrian Democratic Forces which is composed primarily of Kurdish, Arab, and Assyrian/Syriac militias, as well as some smaller Armenian, Turkmen and Chechen forces.

Since most people don't know about the situation here is a brief run down of it:


The Kurds are an ethnic group of about 40 million people centered at the intersection of Turkey, Syria, Iran, and Iraq. Many naturally want their own state. The four countries in which they live naturally do not want that to happen.

On the one hand, the Kurds are a perfect tool for U.S. foreign policy. We can arm the Kurds in whichever of these countries is currently our enemy, whether to make trouble for that country’s government or to accomplish various other objectives. On the other hand, we don’t want the Kurds we’re utilizing to ever get too powerful. If that happened, the other Kurds — i.e., the ones living just across the border in whichever of these countries are currently our allies — might get ideas about freedom and independence.


It seems that this is another instance of the Kurds being used for political gain. In this case, an attempt at internal US political gain by putting Trump into a no win situation.

Ahval, a trilingual independent online news site on Turkey, reported on 1 October that:


"U.S. and Turkish officials last month (September) agreed to work together to create a buffer zone free of fighters from the People’s Protection Units (YPG), which Ankara views as an existential threat due to its presumed links to the outlawed Kurdistan Workers’ Party (PKK). The PKK is an armed group that has been at war in Turkey for over three decades and has been designated as a terrorist organisation by Ankara, the EU and the United States."
"However, Ankara has been critical of the lack of progress made with the envisaged zone, threatening to put its own operation plan into effect if Turkish troops do not control a “safe zone” within a few weeks.
Turkey will also continue with operations in northern Iraq “until all terrorists are eliminated from the area,’’ the council said.
Turkey on Aug. 23, launched Operation Claw-3 in northern Iraq targeting PKK militants.
Monday’s statement by the council also said that Turkey would continue its activities in the eastern Mediterranean."

Al-Jazeera also contradicted the narrative seen in the Western Press about Trump giving a green light to this. Let's toss in that this was not a total withdrawal of US troops from Syria:


In a statement, White House Press Secretary Stephanie Grisham said, "The United States Armed Forces will not support or be involved in the operation, and United States forces, having defeated the ISIS territorial "Caliphate," will no longer be in the immediate area."

The New York Times reported Monday that about 100 to 150 American forces would withdraw from northern Syria but not completely from the country. Newsweek confirmed the Times reporting but the National Security Council official said the number was closer to 230 service members, among them U.S. Special Forces and reconnaissance units.


While Trump's action caused a stir,  it may end up actually creating peace in this part of the world: which is why this is a prime example of Trump Derangement Syndrome. People are upset that Trump could possibly bring peace to the Middle East.

Sure, he may have blundered his way into it, but he would have done brought peace to the Middle East.

Which people suffering from Trump Derangement Syndrome would hate. Yes they would hate peace if Trump managed to achieve it!

Anyway, this story appears to have lived its short life cycle especially if it is yet another tactic that backfires on Trump's detractors. The bottom line is that this is a prime example of Trump Derangement Syndrome because people started reacting without all the facts. It seemed that emotion triumphed over reason in this instance.