Michele Bachmann Struggles with Rejection by America by Attending CPAC 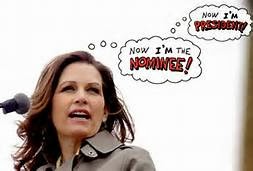 At CPAC, Michele Bachmann continued her cray-cray. She is dealing with rejection the same way she deals with the rest of reality, by denying it. Her own party and base don't want her. She couldn't get re-elected in Minnesota CD6 if she ran.
From the Huff Po:


Rep. Michele Bachmann (R-Minn.) continued her effort on Saturday to tank a potential 2016 presidential bid by Hillary Clinton, telling the crowd at the Conservative Political Action Conference that a woman should eventually be president -- but not the one many Democrats are rooting for.
"We will have a woman for president, just the right one," she said, adding that Republicans are the only party that had a woman on the presidential ticket this century: former Gov. Sarah Palin as the vice presidential nominee in 2008.
Bachmann, who ran for the Republican nomination unsuccessfully in 2012 and declined to run for reelection in Congress this year, was invited to CPAC as a guest of Jenny Beth Martin, the president and co-founder of Tea Party Patriots.
She went on to attack Clinton's work as secretary of state, including relations with Russia and the Benghazi attacks in 2012 that killed four Americans.
"She's going to have to answer a very tough question: Did she pick up the phone and call the secretary of defense and the president of the United States and demand that they send a military rescue operation into Benghazi to rescue Americans that were under fire?" Bachmann said.

Michele Bachmann has low approval ratings - and has had them for quite a long time. The same is true of her buddy in politics, Sarah Palin, unless you get your fake reality from the right wing media.

Of course, Michele Bachmann, like so many conservatives, has a hard time owning responsibility for that disapproval, including the massive failure of the shut-down of government that she supported last fall.  Palin gave the keynote speech at this year's CPAC.

Back in January of this year a PPP poll showed Palin popular among Republican Primary voters, one of the most extreme right wing of the generally radical right.  However, given how badly she failed in 2008 and her failure to remedy any of her failings and deficiencies, there is no way that Palin could become the national candidate for the GOP, much less win a general election in 2016, against ANY of the potential Democratic candidates.

Palin is so generally unpopular, she couldn't win her conservative home state of Alaska - according to mixed messages from PPP.  There is clearly a big difference between Republican primary voters, and the overwhelming majority of normal, sane people.

From PPP - in January:

From PPP - in February:


-Sarah Palin continues to be so unpopular in her home state that she trails Hillary Clinton in a hypothetical contest for President there. Only 39% of voters in Alaska have a favorable opinion of her to 55% who see her in a negative light, and she trails Clinton 44/43 in a head to head. Palin does worse in her home state than any of the other potential Republican candidates we tested. Jeb Bush is the strongest, leading Clinton by 8 at 47/39, followed by Rand Paul who leads her by 6 at 47/41, and Chris Christie and Mike Huckabee who both lead her by 4 points at 43/39 and 45/41 respectively.
The Republican primary field is a jumble with six potential candidates polling in double digits. Rand Paul leads with 15% to 13% for Sarah Palin and Ted Cruz, 12% for Jeb Bush, 11% for Mike Huckabee, 10% for Chris Christie, 6% for Marco Rubio, and 4% each for Paul Ryan and Scott Walker. Even among GOP voters only 28% think Palin should run for President in 2016, compared to 62% who think she should sit it out.


One of the best litmus tests to define a conservative is that they believe things that are not true. That continues to define Palin, the radical right, and more than most of the radical-right-wing-nuttery, that defines soon to be out of office Michele Bachmann. THAT day cannot come soon enough.  But it is likely that Palin and Bachmann and the Tea Party branch of the GOP will believe that they can elect a woman to the presidency, in spite of the efforts by the radical right to continue waging their culture wars on women.

What can you expect from people who hear voices in their head, and think they personally are challenging the voice of God?

Legitimate candidates for office can distinguish the difference between reality, and right wing primaries or CPAC.
Posted by dog gone at 2:03 PM