Clowns to the Left of Me, Jokers to the Right - Obama and McChrystal, Sticks and Rolling Stones, Part II 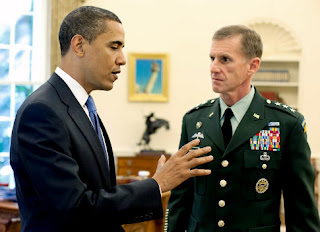 Well you started off with nothing
and you're proud that you're a self-made man
yeah
and your friends they all come crawling,

slap you on the back and say
Please . . .
Please . . .
"Stuck in the Middle with You"
Bob Dylan,  1972
http://www.rushlimbaugh.com/home/daily/site_062410/content/01125108.guest.html
This is the second in my series looking at the reactions from the right and the left to the resignation of General Stan 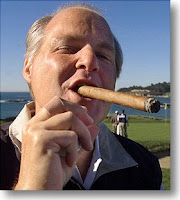 "If this guy is as far left as he is -- and, by the way, if this is true (and I happen to believe it now), if this is the case, you can't say that Obama got rid of McChrystal for politics. They're two peas in a pod here. The guy voted for Obama. So whatever PR somebody wants to attach to it. Obama just got rid of a like-minded soul except for the fact that McChrystal likes to pull the trigger and kill the bad guys and Obama doesn't. McChrystal likes to win. Obama doesn't. But now Obama has been maneuvered into a position where the only option is to win, because that's what you go get Petraeus for. That's why you get rid of McChrystal. So now Obama's really screwed himself and the left-wing base because he'd made it clear he's hired Bush's most hated general -- the successful architect of Iraq, of the surge, counterinsurgency strategy -- and charged him with winning. What do you do bet that July 11th withdrawal date gets moved now? Whatever Petraeus wants, folks, we receive."
McChrystal actually exploiting the Rolling Stone reporter, intentionally making these statements, so as to give Obama the opportunity to put Petraeus back in charge on the ground, in Afghanistan?  Really? "McChrystal likes to win.  Obama doesn't."  Is that so

Now apart from the fact that these are stupid statements to make about either man - both are known to be pretty hard-driven individuals in pursuit of their goals - there is NO substantiation for either claim.  It's just an incredibly stupid thing to say, thrown out as if it were fact -- accepted for no other reason than because "St.-Rush-of-the-Far-Fringies" says so.  No one challenges this kind of thing, any more than anyone challenged Rush asserting that the area of the Exxon Valdez spill was pristine afterwards, or any of his other statements pulled out of his posterior.  Another example is the Rush Limbaugh conspiracy that the SWAT teams - a kind of engineering and inspection crew for oil drilling rigs - was the same as the kind of police special units, and that they were being deployed to defend oil rigs from environmental terrorists, who had already blown up the Deepwater Horizon.  Yup, and he gave equal time, more or less, to the notion that the BP rig was blown by a North Korean mini-submarine-launched torpedo. Not because it was a plausible well-sourced idea, but because it was a cheap pretext for attacking the administration for imaginary or hypothetical failures.
Rush produces nonsense conspiracy theories, without even a tenuous foothold in fact, and his ditto-heads pound it down, they can't get enough of this ideological rot-gut propaganda.  If there were ever an example of the uncritical, unthinking audience, swallowing stupid conspiracy-style explanations for current events, this is it.  Listeners call in to pat each other on the back for these stupid notions, and to praise Rush for them, not to challenge them.  It is no wonder that the listeners who consume this mindless pap will believe that gun ownership is a "God-given Right", or that we are about to be invaded by new-world-order UN forces (or should that be ' farces'?), or that we need armed rogue Oathkeepers defying legitimate orders, to protect us from government re-education camps.... or, over and over, the sweet refrain to ditto-heads "they're a-comin' fer yer guns!!!!!!"  Sheesh, take a step back, ditto-heads.  Take a deep breath, and think for just a minute.

Rush was so impressed with himself, he devoted an 'extended segment' to the topic.  Which makes pretty much all of the time devoted to that extended segment more wastage than usual, precious minutes his ditto-heads will never get back.  This is as stupid as any birther conspiracy, as fact-deficient as anything I've seen come out of the right, or left.
Someone should be ashamed of themselves; and then they should wean themselves away from this nonsensical ideological pollution, and start acquainting themselves with factual sources, and better reasoned premises for understanding politics.
Too much of this, and your brain might liquefy and begin leaking out of your ears; and maybe out of your eyes and nose, and trickling down the back of your throat, too.
Perhaps it is time for the right to stop worrying so much about growing a pair of testicles, real or symbolic, and time for them to devote more concern to the health of their frontal lobes. Because these statements from Rush make Ed Shultz look positively like the brilliant voice of sweet reason - and that isn't easy.
So long as we have this large a gap between the left and the right, between facts and reason versus paranoid conspiracy theories, we will never bridge the gap between the right, the left, and the majority in the middle who reject this kind of pure fantasy.  We will continue to be more divided, moving closer to the muddled logic promoting insurrection and sedition and away from any hope of consensus
For more of my thoughts about Rush, you can look at something I wrote just over a year ago, back when I was a new contributing author here on Penigma:
http://penigma.blogspot.com/2009/06/theyre-only-words.html
Posted by dog gone at 3:10 PM