Franken's Comments from the Kagan Confirmation 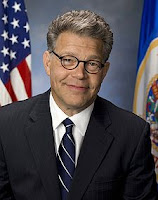 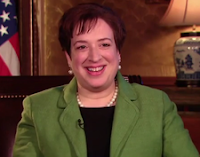 When I heard these comments on the radio, I applauded them. I repost them here from Senator Franken's website (saving me transcribing them), because I found them so insightful, and because I applaud his understanding of the issues that these comments convey.
I hope that Penigma readers will take a few moments and read them in their entirety. I would particularly direct attention to the observations about the activist judges of the Roberts Court. For anyone interested in his web site, the link is here, or you can click on the title of this post.
http://franken.senate.gov/?p=news&id=887

Every Senator who has spoken before me has sworn to "support and defend the Constitution of the United States." And so have I. There are few things that we do that are more important to fulfilling that oath than making sure that the Justices of the United States Supreme Court are brilliant, humane, and just individuals

Now, last year, I used my time during these hearings to highlight what I think is one of the most serious threats to our Constitution and to the rights it guarantees the American people: the activism of the Roberts Court.

I noted that for years, conservatives running for the Senate have made it almost an article of faith that they won't vote for activist judges who make law from the bench. And when asked to name a model justice, they would often cite Justice Thomas, who I noted has voted to overturn more federal laws than Justices Stevens and Breyer combined. In recent cycles, they would name Chief Justice Roberts.

And it is practiced repeatedly by the Roberts Court, where it has cut in only one direction: in favor of powerful corporate interests, and against the rights of individual Americans.

In the next few days, I want to continue this conversation. Because I think things have only gotten worse.

And so I want to say one thing to the Minnesotans watching at home: With few exceptions, whether you're a worker, a pensioner, a small business owner, a woman, a voter, or a person who drinks water, your rights are harder to defend today than they were five years ago.

Our state has been victim to the third-largest Ponzi scheme in history.

And yet in 2008, in a case called Stoneridge, the Roberts Court made it harder for investors to get their money back from the people that defrauded them.

The Twin Cities have more older workers per capita than almost any other city in the nation.

And yet in 2009, in a case called Gross, the Roberts Court made it easier for corporations to fire older Americans and get away with it.

Minnesota has more wetlands than all but three states.

And yet in a case called Rapanos, the Court cut countless streams and wetlands out of the Clean Water Act-even though they'd been covered for up to 30 years.

Our state has banned all corporate spending on elections since 1988.

And yet in January, in Citizens United, the Roberts Court nullified our laws and turned back a century of federal law by allowing corporations to spend as much money as they want, whenever they want, in our elections.

There's another pattern here. In each of these decisions, in every one, Justice John Paul Stevens led the dissent.

Now Justice Stevens is no firebrand liberal. He was appointed to the Seventh Circuit by Richard Nixon. And he was elevated to the Supreme Court by Gerald Ford. By all accounts, he was considered a moderate.

And yet he didn't hesitate to tell corporations that they aren't a part of "'We the People,' by whom and for whom our Constitution was established." And he didn't flinch when he told a President that "the Executive is bound to comply with the rule of law."

Now, you've heard a lot about this decision already today, but I want to come at it from a slightly different angle.

There is no doubt: the Roberts Court's disregard for a century of federal law-and decades of the Supreme Court's own rulings-is wrong. It's shocking. And it's torn a gaping hole in our election laws.

So of course I'm worried about how Citizens United is going to change our elections.

But I am more worried about how this decision is going to affect our communities-and our ability to run those communities without a permission slip from big business.

Let me give you two examples of what I am talking about.

In the early 1960s, car companies knew that they could avoid a large number of fatalities just by installing seat belts in every vehicle. But they didn't want to. They said "safety doesn't sell."

But Congress didn't listen to the car companies. And so in 1966, Congress passed a law requiring that all passenger cars have seatbelts.

Since then, the fatality rate from car accidents has dropped 71 percent.

Here's another story. Around the same time that we passed the seatbelt law, people started to realize that the leaded gasoline that cars ran on was poisoning our air. But oil companies didn't want to take the lead out of gasoline. Because altering their refineries was going to be, in the words of the Wall Street Journal, a "multi-billion dollar headache."

But in 1970, Congress passed the Clean Air Act anyway. And thanks in part to that law, by 1995, the percentage of children with elevated levels of lead in their blood had dropped by 84%.

Along with the Clean Water Act of 1972, the Clean Air Act of 1970 and the Motor Vehicle Safety Act are three of the pillars of modern consumer safety and environmental laws.

But here's something else they have in common. They were all passed around 60 days before an election.

Do you think those laws would have stood a chance if Standard Oil and GM could have spent millions of dollars advertising against vulnerable congressmen, by name, in the last months before their elections?

It's about seat belts. It's about clean air and clean water. It's about energy policy and the rights of workers and investors. It's about health care. It's about our ability to pass laws that protect the American people even if it hurts the corporate bottom line.

As Justice Stevens said, it's about our "need to prevent corporations from undermining self-government."

But I think that you get that. Maybe more than anyone else in this room.

General Kagan, you've shown remarkable skill as a lawyer for our government, and remarkable candor as one of its critics-say, for example, of Supreme Court confirmation hearings. I like that.

I want to see that legal skill in action. And I want to see if you might continue the work of Justice Stevens.