You think you know what the Electoral College is about?

Take this quiz for an eye opener.

The electoral college really does none of the things it is supposed to do.

And ponder this before you say I am being a "liberal whiner" or such:


Clinton won a gigantic 370-168 electoral vote majority and became president, despite having won only 43 percent of the popular vote [in 1992].
https://www.minnpost.com/eric-black-ink/2012/10/picking-president-dangers-and-weird-outcomes-electoral-college 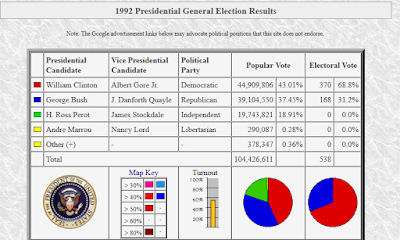 Five million votes separated Barack Obama and Mitt Romney in the popular vote during the 2012 election. It would be a stretch to call the 2012 presidential election a particularly close one with a margin that large. But because of the peculiarities of the Electoral College, a shift in just three hundred thousand votes in four states would have made Romney, rather than Obama, the president. Similarly John Kerry would have defeated George Bush in the Electoral College with a shift of fewer than a hundred thousand votes in Ohio.

Think about that when you try to say I am just being a whiner.

The Electoral College is anti-democratic and that is not a good thing in a nation which has presented itself as having free and fair elections to the point of fighting wars based on that lie.


See also, Eric Black's series in the Minn Post (not in any particular order):
And this:
Trump’s victory another example of how Electoral College wins are bigger than popular vote ones
Posted by Laci The Dog at 9:37 AM No comments:

What is the difference between a Republic and a Democracy? (Part I)

I'm going to start this off in two parts because I want people's opinion on which of these systems embody the following principles?
The rest of this will come in a later post.
Posted by Laci The Dog at 3:06 PM No comments:


The Neo-Nazi rally in Charlottesville was not covered by the First or Second Amendments as the above picture demonstrates.


It cannot be successfully questioned that the State governments, unless restrained by their own Constitutions, have the power to regulate or prohibit associations and meetings of the people, except in the case of peaceable assemblies to perform the duties or exercise the privileges of citizens of the United States; and have also the power to control and regulate the organization, drilling, and parading of military bodies and associations, except when such bodies or associations are *268 authorized by the militia laws of the United States. The exercise of this power by the States is necessary to the public peace, safety and good order. To deny the power would be to deny the right of the State to disperse assemblages organized for sedition and treason, and the right to suppress armed mobs bent on riot and rapine.

Presser needs to be brought back into the "Second Amendment Jurisprudence", although it seems to boggle the mind that anyone could claim an armed assembly to somehow fit within the definition of "peaceably assemble".

We can go a bit further to the claim about one belonging to an "unorganised militia" leading to Second Amendment rights, but Presser made it clear that neither Presser nor the Lehr und Wehr Verein "had no license from the governor of Illinois to drill or parade as a part of the militia of the state, and was not a part of the regular organized militia of the state, nor a part of troops of the United States, and had no organization under the militia law of the United States."

Presser made it clear that:


The right voluntarily to associate together as a military company or organization, or to drill or parade with arms, without, and independent of, an act of congress or law of the state authorizing the same, is not an attribute of national citizenship. Military organization and military drill and parade under arms are subjects especially under the control of the government of every country. They cannot be claimed as a right independent of law. Under our political system they are subject to the regulation and control of the state and federal governments, acting in due regard to their respective prerogatives and powers. The constitution and laws of the United States will be searched in vain for any support to the view that these rights are privileges and immunities of citizens of the United States independent of some specific legislation on the subject.

We can also get into the historic events which led to the adoption of the Constitution, one of which was Shays' Rebellion, along with the text of the Constitution to see that somehow trying to turn the "well-regulated militia" into a mob, which the insurrection theory does, is an absurdity.

The right needs to abandon its absurd interpretation of the Second Amendment, in particular that it somehow gives licence to rebellion.

Even more importantly, it needs to see where this absurdity has taken us. Time for this shit to stop.

See also:
The Chilling Effects of Openly Displayed Firearms
Posted by Laci The Dog at 2:23 AM No comments:

The GOP's continuing silence on Charlottesville is defeaning. The President made a false equivalency argument that both the left AND right operate with violence and therefore the blame for some guy driving his car into a crows was shared. However, I don’t recall the last time a leftist blew up an abortion center, killed a doctor performing legal services, knifed people standing up for teenage girls or blew up a federal building (or tried).

Claims of left wing accountability for what happened in Charlotte are absurd.  The left (improperly) attempts to squelch free speech, and I don’t support it, but they clearly are allowed to try and clearly are ALLOWED to boycott (like it or not). No one, though, is allowed to engage in premeditated acts of terrorism and intimidation. The left is not immune from engaging in violence, but it is rare compared to right-wing violence.  The GOP has falsely tried to claim the primary problem is a lack of civility on both sides, violence on both sides.  That is bullcrap, the primary problem is that the GOP, and more importantly conservatives has used dog whistle terminology to appeal to racism since the time of Reagan (and even before that if we include the writing of William F. Buckley - grandfather of modern conservatism).

Go read that again, 74% of ALL terrorism in the US over the past 10 years has been by right-wing extremists, 2% by left wing. That’s not equal, that’s not “Blackshirts”, it’s not left wing tyranny. It’s right-wing violence.

Bluntly, there is no equivalency at all and the GOP has no excuse for remaining silent on this issue.  The only reason they are silent or have been, is that appealing to racism works for them to help win elections.  They use those same dog whistles when they bring up "election fraud", blacks and Hispanics are voting twice, that's the only reason the GOP loses elections.  They are now seeing the fruits of their cowardice.  When you tell whackos that they should be afraid of their government and have rights to "defend themselves" from thugs, you have folks walking around with semi-auto rifles, having illegally invaded a US Government facility, staring down the ATF and FBI.  The GOP fails to call that out as crazy, but more importantly, it continues to bring up these dog whistles (like voter fraud) - and so we get right-wing terrorism like some crazy a$#ole driving a car into protesters.  No left-winger did that, no left-winger forced anyone to do that.  This wasn't retaliation, it was a pre-meditated act by a racist, fascistic Nazi and the GOP owns that lock, stock and barrel, there is no equal on the left.
Posted by Penigma at 10:29 AM 2 comments:

Once again Penigma scoops the Mass Media on who "hacked" the DNC, 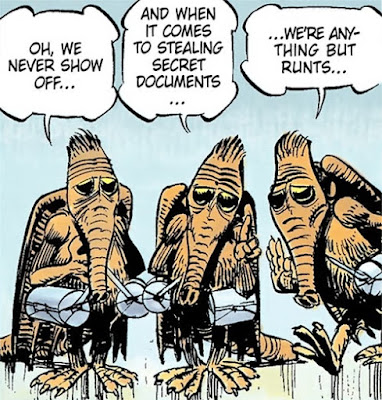 It sort of makes sense since nobody is taking credit for a leak.  It would have to be these crafty little critters from Mézières' and Christin's (and now Luc Besson) Valérian et Laureline. What else could so easily get away with stealing documents and then leaking them.

See:
Why Some U.S. Ex-Spies Don't Buy the Russia Story
Posted by Laci The Dog at 2:47 PM No comments:

Addendum to Why I left the Democratic Party and went back to being independent.

I added this to the end of that Post:


It was also influential that the Clinton camp (and pretty much everybody) was pointing out that Trump would never win.  I can remember at least three predictions of a Clinton landslide.  Well, Clinton did get more popular votes, but the prediction of her winning was premature. I can say that most of the factors in my deciding to bolt from the Democratic party was due to their actions, not "Russian interference" of any sort. I think that goes for most people who voted for Third Parties.

Any real discussion of the election should try to address the real issues that led to Trump being President. Which would also include Clintonite overconfidence they would win (which they did as far as the popular vote goes, but the Electoral College needs to go).