Today is not "Victory in the Pacific"

That's because Japanese holdouts(残留日本兵), who were soldiers and sailors that continued to fight after the surrender of Japan in August 1945. Japanese holdouts either doubted the veracity of the formal surrender, rejected demobilization for ideological reasons, or were simply not aware because communications had been cut off by Allied advances.

Using the logic of Juneteenth, the Second World War in the Pacific could have continued well into the 1990s. Although the last confirmed surrender was Private Teruo Nakamura, a Taiwanese-born soldier who was discovered by the Indonesian Air Force on Morotai, and surrendered to a search patrol on December 18, 1974. Nakamura, who couldn't speak Japanese or Chinese. He  was discovered 29 years, 3 months, and 16 days after the Japanese Instrument of Surrender was signed.

Likewise, it can be shown that slavery still exists, which knocks another premise of Juneteenth: that it was the end of slavery. Any luck it will go back to being the virtue signalling non-entity is was before this year.

But, please feel free to have your picnic and parade. Juneteenth is a quaint reminder of the horrors of war.

Some people get cut off from world events.

Mention "nationalism" if you want to start me on a rant.

I am posting this in response to something I just watched called "What It Mean To Be Pro-European?" The person who made it is working under this mistaken belief that European nations are somehow homogeneous.
This Alsatian/German-Belgian/Polish-Ukrainian/British/Balkan/etcetera person calls bullshit.
This animation sucks because is only shows the Northern shore of the Med. European culture has been tied to Asia and Africa since prehistory.
And let's not forget that Europeans have been at each other's throats for millennia, but I can't prove that since that also gets into prehistory. And some groups find themselves living with other groups. And fighting over which alphabet to use, or which religion to follow.
And that's even within Christianity.
Let's not forget that Europe is a stone's throw from Africa in the West (at Gibraltar) and connected to Asia/Middle East in the East. Islam has had an influence on European culture. Especially Spanish culture. After all, Europe is separated from Africa by the Mediterranean.
The Celts, Romans, and Vikings all spread out and went native while we're at it.
Italy and Germany only date to the mid-19th Century. But some European countries are more recent than that. After all, Yugoslavia had a bad break up. They don't call it "Balkanisation" for nothin' (can't forget I have Balkan in me as well).
I call myself "European" since that is the best way to describe myself since my ancestors came from countries which no longer exist, or were swallowed up by other countries. Also, accepting the diversity of cultures, some of which I can't relate to, requires me to take on a blanket term.
And, unless I want to be really provincial in the true sense of the term, I have to describe myself using a blanket term. People from the United States describe themselves in a blanket term as well since they call themselves "Americans" or US citizens, not citizens of the state they are from.
Brexit has shown that "European" isn't a national descriptor, but a blanket term for people living in the European continent: no matter what their ethnicity. Likewise, the same applies to US citizens. 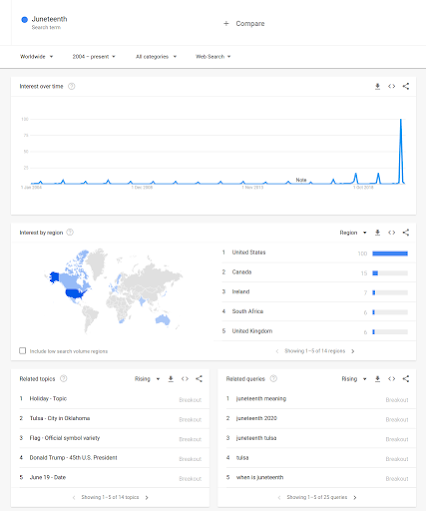 I thought I did a post about Juneteenth being relatively unknown until recently. Google Trends analysis of searches on "Juneteenth" only show a massive interest starting from the end of THIS May to around the 23rd of June.  There was minimal interest in this "holiday" prior to that date.

You weren't crazy if you were wondering why you had never heard of it before this year,

And you were among a very small group of people if you DID know about this prior to this year.

While the media tried to make this sound like something which had been around for a long time, the reality is that the Juneteenth this was steamrollered over us. Wired points it out in their Why Juneteenth Went Viral. Wired's piece tends toward this being something contemplative, but I do question the interest in Juneteenth, as opposed to Odunde, as being virtue signalling.

It's no coincidence that the movement to celebrate Juneteenth came during the Black Lives Matter riots (sorry, but more than one city was trashed and these were counterproductive as fuck. So, fuck you, I'll call them as I see them). It's more of the meaningless virtue signalling to try and calm the rioters.

But it was a small group of people who made this a thing as Protocol's How a Group of Creatives made Juneteenth 'spread like wildfire'. Yeah, "creatives" as in advertising types. Not just any advertising types, but ones connected to the social media industry.

I am trying to break from the surveillance economy,. Not only do they keep tabs on you, but they try and influence your opinion.

I'm crying "bullshit" about the virtue signalling relating to Black Lives Matter. Nothing significant will come from the past few months. If anything, those events will make matters worse. I know they increased gun sales.

I am already certain that Trump will be reelected. Even if he isn't, the Democratic candidate isn't onside.

So, what was the point of it all?

I prefer substance to Bullshit, but the bullshit is piling up like the trash on the streets of Philadelphia and NYC.