One thing that makes a nation is a common heritage and culture, which is often shown by a common language. After all, communicating is what language is all about. And people can't communicate if they are speaking different languages. Quite a few countries require prospective immigrants to demonstrate proficiency with their language: Canada and France come to mind.

Proponents of this movement include US Senator S.I. Hayakawa and Mauro E. Mujica, who is a naturalized citizen, Mujica was born in Antofagasta, Chile, and moved to the United States in 1964. Is someone who speaks multiple languages who berates someone for speaking Spanish really racist or just pointing out that it's rude to speak another language (e.g, Aaron Schlossberg).  Could he have made his point in another way.

Contrary to what is often believed, most of the world's population is bilingual or multilingual. Monolingualism is characteristic only of a minority of the world's peoples. On the other hand, it makes more sense to speak the common language instead of another language (Disclosure: I speak English, French, and German)

Would it take the US making English the official language to end this debate, especially since currently it seems that people who are "Trump supporters" are being accused of the being the crowd who support speaking English.

On the other hand, having a common language would be a factor in a national identity.
Posted by Laci The Dog at 8:15 PM No comments: 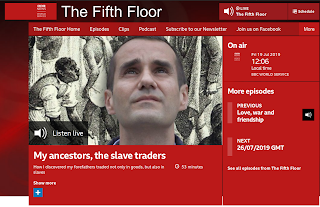 You can listen to this episode here: https://www.bbc.co.uk/sounds/play/w3csynsp. The person in question is Spanish and his family was trading slaves after the trade became illegal.
Posted by Laci The Dog at 6:32 AM No comments:

And now that you are distracted by the concept or reparations...

What exactly is the status of The Voting Rights Act of 1965?

Serious question since this is something which happened recently enough to be in our lifetime. It also has a real impact on current events where as reparations are pretty nebulous.

Wouldn't it make more sense to be discussing this since it has a very real effect on minorities and US politics?

Which leads to the next question: WHY isn't it being discussed?
Posted by Laci The Dog at 12:25 PM No comments:

What if capitalism and free market forces worked to regulate firearms in the US?

One of the things mentioned in this clip is a landlord's prohibition on gun ownership in the lease not being a violation of the Second Amendment.

Anyway, the firearms market is pretty much saturated with companies going bankrupt.

It may not be the librul-progressives that kill this insanity as much as market forces working to limit it.


Footnote
{1} US v Miller States that "With obvious purpose to assure the continuation and render possible the effectiveness of such forces, the declaration and guarantee of the Second Amendment were made. It must be interpreted and applied with that end in view." This is the exact opposite conclusion from that drawn by the Heller-MCDonald decisions.

Funny how this myth seems to have caught on with the gunloon population (and fans of the military system, which includes cops).

So much is wrong with it.

And the people who thought it would have been funny if I took the real Laci out hunting boar really have no idea of how fearless and selfless dogs are. Which takes us back to the previous point: a dog will protect a pack member. And that is the case no matter how small the dog is.

They don't need guns. They have their teeth, agility, and strength.

Another point with how wacky this trope is comes with the fact that Dogs and Wolves aren't that different. Dogs are a lot more accustomed to being around humans. Dogs also know the human is the boss. But other than that: there isn't that much difference between Lobo and Laci the Powderpuff Chinese Crested in how they act. 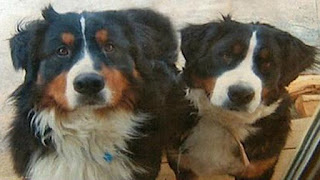 Sheepdogs work using their innate characteristics for hunting (herding sheepdogs) or pack protection (pastoral sheepdogs). The pastoral sheepdog is going to hang with the herd of sheep and protect it from preditors: animal or human. You want a good example of a pastoral sheepdog and it would be the Bearnaise Mountain Dog. Nice until you provoke it.

And they are about as different from the wolf, sheepdog, and sheep trope as you can get.

On the other hand,Argus and Fiona were two Bernese mountain dogs that were shot and killed when they entered a neighbor's yard. The dude with the gun was afraid they would kill his sheep. I guess the dogs were pretty scary to someone who has a gun.

The real bottom line here is that a real sheepdog doesn't need to have a gun, or force, to be effective at protecting sheep.

Also, we need to beware of the sheepdogs who want to keep us in line by using fear.
Posted by Laci The Dog at 10:14 PM No comments:

I was going for my shepherd's crook to use it. That brought back memories of growing up on a farm.

And, sheepdogs as well. After all, I am a total dog lover: especially working dogs. 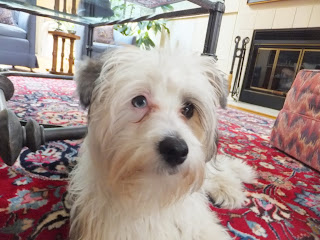 But there's an irony for me in the right wing trope of the sheep, sheepdogs, and wolves, which shouldn't surprise me it was dreamed up by a Yank. A Yank who probably never spent any time on a farm with sheep and sheepdogs.

Britain is relatively free of wolves, which is also the case with New Zealand. Both places along with the US are where I grew up raising sheep. And having sheepdogs herd the sheep.

Sheepdogs rarely every encounter a wolf, which is good since they are usually border collies, bearded collies, or Old English Sheepdogs. So, they aren't busy keeping the sheep blissfully happy in their ignorance through protecting them from wolves. Sheepdogs are keeping sheep in line through force. Not sure what would be the outcome of an actual sheepdog wolf encounter. I would bet on the wolf.

No, what sheep do is they herd sheep and take them to be sheared. or to the barn. Or slaughtered. A sheep dog makes the sheep go left, go right, stop in place, go too fast, slow down, etc.. The sheepdog says, ‘you do where my master wants you to do.”

Sheepdogs aren't a symbol of liberty: they are the symbol of oppression. Sheepdogs herd the people, telling them what they can or can’t do. They represent fascism, not liberty. They are not the protectors, they are the forces of repression. They are as authoritarian as you can get, which is probably why aggressive people latch onto this.

I have yet to see someone who uses this analogy demonstrate they have spent any time around sheep. Or Sheepdogs. I grew up going to sheepdog trials (and got my start as a lawyer defending them [that was a joke]). Actually, sheepdog trials are where you see sheepdogs in action.

I hope that gives you an idea of how fucked this analogy is.

Anyway, when we herded sheep we had shepherd's crooks and sheepdogs: not to protect them, but to herd the sheep. we had sheep shears when we sheared them. And shovels when we cleaned the pen.

We were keeping them in line. Not protecting them from wolves.

A Moment of Science: Sheepdogs and Wolves

Why knowing a second language is a good thing.

In this case, the person should learn American Sign Language (ASL) 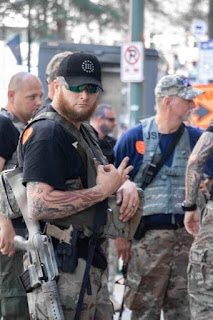 Because the gesture he is making is the one for "asshole" in American Sign Language.

We can only hope that he has realised he is an asshole, but I seriously doubt he has the intelligence. 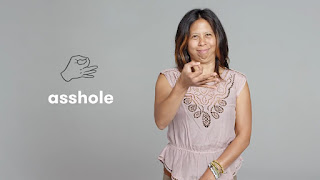 Well, we're having a laugh at you.