Why progressives and "Democrats" will never mix 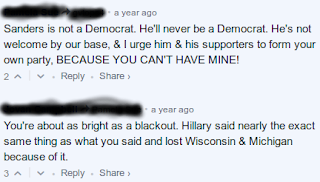 I am amazed at the people who tried to persuade me that the "Democratic Party" was somehow a "coalition".

And the Clinton Supporters wonder why they lost the election.

Anyway, there is a long history of disdain for real progressivism in the "Democratic Party". Its treatment of Henry Wallace being one of many instances of which the Sanders Campaign was one the latest example (along with ambivalence toward Alexandria Ocasio-Cortez). Sure, the "Democratic Party" are hoping that an embrace of "A Green New Deal" in name might attract people.

Toss in the progressives lite candidates that are being mentioned in the press: many of which don't stand the scrutiny of being truly progressive. This is made worse since the environment is the most important issue now facing the US world.

There is a laundry list I had with Clinton, but her inability to give a solid stance on the environment and climate change was a real biggie for me. The difference from Trump, a climate change denier, and Clinton, someone likely to do fuck all, was non-existent in that regard.

So, I will take the advice of the "Democrat" who doesn't want my vote and move to a party more in line with my political beliefs.

Just don't try and blame me for your mistakes.

See also:
Bernie is not even a Democrat, so why is he ripping our party apart?
The real secret to Bernie Sanders’ success
2020 Is Already Shaping Up to Be Another Festival of Stupid
Opinion | The Democratic Party left me — and I'm not alone
NYT: Don’t Be Progressive, Be a ‘Liberal’
Yes, let's wipe out Trump. But take neoliberal Democrats with him, too
Henry Wallace, America’s Forgotten Visionary
Untold History: The Rise and Fall of a Progressive Vice-President of the USA
On climate change, the difference between Trump and Clinton is really quite simple
The Democratic Party Has a Climate Change Problem
Posted by Laci The Dog at 11:37 AM No comments:

More Electoral Colege, or ONCE AGAIN: No, the Green Party, or any other third party, did not cost Clinton the election 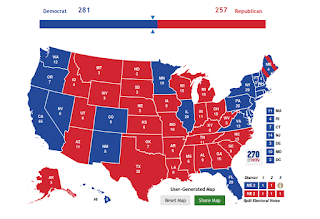 Another point the "Greens cost Clinton the election" crowd miss in their fixation with the three states Clinton thought were safe (Michigan, Pennsylvania,and Wisconsin) miss is that Clinton could also have won with just the votes from Florida and any one of the three "safe states".

The Florida scenario would also mean that she would have won with 21 States and the District of Columbia (see the atttached pic for how this all would have worked out).

If anything, the fact that the popular vote is meaningless is one of the more significant reasons for voting Green (toss in the Environment is far more my "single issue" if we are going there).

While people may try to shame people who vote third party, the fact is that the popular vote is meaningless as long as the Electoral College is in effect.

If anything, the 2000 and 2016 Elections have demonstrated that the Electoral College is another relic from the US Constitution that needs to be purged.

No, the Green Party, or any other third party, did not cost Clinton the election

Quite simply it invalidates the popular vote.

Anyway, somebody was trying to tell me that Clinton would have won if Green voters in  Michigan and Pennsylvania had voted for her. That argument is obviously fallacious, but It’s easy to see why people point the finger at third-party votes.

In Michigan, where the election was so close that the Associated Press still hadn’t called the result until some time after the election. Trump was ahead by about 12,000 votes at that time. That was significantly less than the 242,867 votes that went to third-party candidates in Michigan

On the other hand, Clinton would have still lost even if she had managed to win the popular vote in either Michigan or Pennsylvania.

Clinton needed to win all three states, Michigan, Pennsylvania, and Wisconsin, to get the 270 Electoral Votes needed to win.

There's a reason why the Interactive Electoral College map site is called https://www.270towin.com/. As they point out:

There are a lot of other problems with trying to blame the Third Parties for Clinton's loss (especially since Gary Johnson received a larger percentage of the vote than Jill Stein).

One of the major reasons I left the Democratic Party, and the duopoly, is that Election Reform is a really big issue in US politics. Only the Third parties were discussing this.

The 2016 Election also demonstrated that voting was pretty much meaningless. The primaries are a sham and rigged to eliminate candidates from running (cost). And the Presidential Election is really a sham with the Electoral College in Place.

The Electoral College is one of the glaring flaws in US politics, but people want to blame everything but the flawed system for the problems we see.