A guess on why Slavery, Indentured Servitude, and Transportation aren't properly discussed in the US 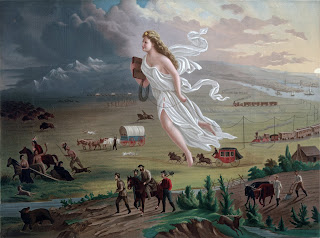 It makes people uncomfortable to think that someone's ancestors didn't come to the US willingly. Slavery, indentured servitude, and transportation run against the narrative of people coming here for the "American Dream". Unless you mean the American Dream of someone else who receives cheap labour.

Tell someone who wants to know your ancestors immigration story that they came over in chains as a slave and they get all uncomfortable.

And Transportation is something no one is willing to talk about, but I would scream out my convict heritage like an Aussie boasts about being an ancestor of the first fleet if I found out one was in my family tree. But people also get really uncomfortable when they find out that a lot of pre-Independence immigrants were felons.

Bottom line is that unwilling immigrants aren't what people want to hear about.
Posted by Laci The Dog at 8:20 AM No comments:

I'll admit I am a confused white guy when it comes to reparations.

Another big issue with this topic is that there is also no consensus on the Black (?) or African American (?) side. Case in point, Kay Coles James is President of The Heritage Foundation. She is also a black woman, and a Republican, which can cause some people's head to explode if they wish to believe that gender or race influences their opinion.

It is also the exception which proves the rule ("prove" meaning "tests") in that she is a black woman with a highly impressive CV going by the write up here: https://www.heritage.org/staff/kay-coles-james.

OK, Black Conservatives are definitely NOT on the same page as Ta-Nehisi Coates, or even me. But they do raise the question is it racism or is the issue something else which reparations aren't really going to address.

Part of the reason I mention Kay Coles James is that she is a black woman from a southern, former slave state who has done well in society.  Perhaps that is due to when she grew up.

On the other hand, this white guy, who was born in Detroit has had his own share of eating 50 cent burritos and being leveraged to the hilt with debt during periods of unemployment.

Is that my white privilege at work?

Anyway, the black conservative opinion on this topic runs like this:


Perhaps we should remember the legacy of a former slave who rose up from slavery to advise presidents – Booker T. Washington – who never asked for reparations. Washington preached dignity through work – to become so skilled that you earned respect. “Nothing ever comes to me, that is worth having, except as the result of hard work,” he said. That’s what pulled Washington up from slavery. It doesn’t have to work for just one man.

My point isn't that I don't think that slavery was bad or that there is no discrimination, but there is more than one opinion. Likewise, the past 160 odd years have changed the playing field to make this a very complex issue to address.

The bottom line is that any reparations may not be monetary: they may be more symbolic.  Something to make people feel good about historic events which we must acknowledge, but cannot change.
Posted by Laci The Dog at 3:01 PM No comments:

There is a reason why the topics of slavery, indentured servitude, and transportation are neglected: because one of the United States' many myths is the myth of the immigrant coming because of the American promise. People arriving against their will goes against that myth. Someone boasts how their ancestors came for the opportunities found in the US has to deal with the fact that segments of the population arrived against their will.

Slave ships and auctions are the antithesis of Ellis Island, which is probably another myth as well. 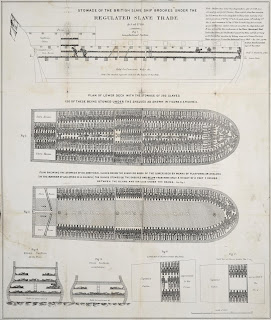 But slavery, or people as commercial objects, is an integral part of US immigration law. The US has jus soli because of slavery and Dred Scott. The Fourteenth Amendment was a result of slavery. It haunts immigration policy because anyone born in the US is automatically a citizen: no matter whether their parents were lawfully present in the country.

There is the indignation by some people about children being placed in "cages", yet those are the holding cells used by the police in the US.  Now, how would those people feel about people who arrived in this country chained together?

I am not going to get into a debate about people who are lawfully present or not, but treating migrant workers as property for the benefit of others leads to terrible consequences. Sure, there should be a process to allow workers into the country if there happens to be a lack of workers: but is there no unemployment in the US?

Bottom line, the US has a love of exploiting workers, which is a big part of the discussion. And that fact is highly uncomfortable.

Are Capitalism and property rights the enemies of the Second Amendment? 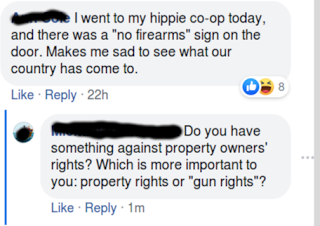 
The second and tenth counts are equally defective. The right there specified is that of "bearing arms for a lawful purpose." This is not a right granted by the Constitution. Neither is it in any manner dependent upon that instrument for its existence. The second amendment declares that it shall not be infringed, but this, as has been seen, means no more than that it shall not be infringed by Congress. This is one of the amendments that has no other effect than to restrict the powers of the national government, leaving the people to look for their protection against any violation by their fellow citizens of the rights it recognizes, to what is called, in The City of New York v. Miln, 11 Pet. 139, the "powers which relate to merely municipal legislation, or what was, perhaps, more properly called internal police," "not surrendered or restrained" by the Constitution of the United States.

The right is one of "bearing arms for a lawful purpose" and it only limits congress. Yet another example of how Heller and McDonald area break from the legal precedents set by the Court itself. McDonald truly being the outlier since it takes something which is specifically tied to Congress's power under Article I, Section 8, Clause 16 and "expands" it ultra vires to the States. Additionally, the rights mentioned in the various "Bills of Rights" out there only apply to governmental action.

Which is the reason I point to this case because the New York Times has a piece about how business leaders are calling on the government to regulate firearms. This comes on the heel of announcements by businesses that they will no longer tolerate open carry.


The movement has gained momentum since last month, when a shooting at a Walmart store in El Paso killed 22 people. A day later, nine people were shot and killed in Dayton, Ohio.

“Gun violence in America is not inevitable; it’s preventable,” the business leaders wrote. “We need our lawmakers to support common-sense gun laws that could prevent tragedies like these.”

Property owners have the right to control who enters their property and how they are supposed to do it. Additionally, they have a duty to make sure that people on their property are safe.

Even more importantly, the nonsense about how armed individuals stop these shootings is being shown to be just that.

Cruikshank may seem cryptic at first blush, but it is highly important to understanding the Second Amendment. The right is similar to that given in the English Bill of Rights, to carry arms for a lawful purpose. Presser made it clear that the right was tied the active militia, what is now the National Guard.

Heller and McDonald were both ultra vires because they both went beyond the scope of Constitutional interpretation, but they have the advantage in that they were extremely limited in scope and subject to strict regulation.

One doesn't need to choose between two different schools of interpretation of the Second Amendment: one just has to admit that the right is "well-regulated".
Posted by Laci The Dog at 7:03 AM No comments: