Carefully study this picture before answering:

Please explain to me the disparity between the popular vote (small print under photos of candidates) and the electoral votes.

How is this a result of "Russian interference in the US election process"?

I will add that the rumours of Catherine the Great and farm animals are not grounded in reality. She didn't die fucking a horse.

And she certainly didn't fuck a donkey 222 years after she died.

Now, fuck off unless you are going to address real problems and stop playing silly buggers.
Posted by Laci The Dog at 7:04 PM No comments:

Why it's Russian Interference instead of Election Reform.

There is a reason people are fixated with having Russian Interference shoved down their throats: Both parties are guilty of "dirty tricks". You point out that the US meddling was much worse than anything the Russians did and people tend to write that off as somehow being OK. In fact all the Russians did was to point out the problems, which means anyone who points out the real issues is somehow a "Russian Bot".

Anyway, the reason that no one is doing anything about the Electoral College is that it is one of the best things for keeping the duopoly going. It's hard for new parties to get into the system. Hint: one of the reasons I voted Green was the hope that the party would somehow get enough of the vote to have ballot access and other perks that being a national party would bring.
Posted by Laci The Dog at 6:57 AM No comments:

Postscript to How bad was early firearms Technology?

English musketeers didn't use swords, instead they used their weapons as clubs!
Posted by Laci The Dog at 6:49 AM No comments:

How bad was early firearms Technology? Quick, what do you think of when you hear the word musketeer?


A musketeer, from the French mousquetaire, was a type of soldier equipped with a musket. Musketeers were an important part of early modern armies, particularly in Europe and the west, as they normally made the majority of their infantry. The musketeer was a precursor to the rifleman. Muskets were replaced by rifles in most western armies during the mid-1850s.

But most people think of Alexandre Dumas' The Three Musketeers and loads of swordplay. That's because The musket, though the prime weapon of the French Musketeers, was a cumbersome firearm to load and fire, as were other firearms of the time. That meant that a good rapier was a necessary second weapon that no musketeer was likely ever without. That meant the musketeers were also a skilled swordsmen.


In 1622, Louis XIII, at that time at war against the Protestants, detached the 50 soldiers armed with carbines from the companies of his guard’s light­horse cavalry to form an independent unit. These soldiers were armed with a musket, a heavy weapon that could only be used on foot, but they were still cavalry who moved around on horseback. Called Musketeers of the Guard, a military branch of the Maison du Roi, they wore the famous blue tabard decorated with the cross and Fleur­de­lys, the symbol showing that they belonged to the King’s Household. The character of the musketeer mounted foot­soldiers made very varied missions a possibility: escorting the royal retinue, policing operations and maintaining order but, above all, they were in the first line of the royal troops when it meant relieving a town under siege. In 1693, Louis XIV ceased to go to war and, from then on, the companies only took part in special cases. This period marked the end of the musketeers’ golden age, when they served in the last campaigns of Louis XIV but were rarely seen on the battlefield during his successor’s reign. During the eighteenth century, their mission mainly consisted in a guard and prestige service to the king. They were exposed to enemy fire one last time during the War of the Austrian Succession (1740–48). In 1775, the two companies were disbanded for budgetary reasons. Formed again briefly under the Restoration, they were definitely disbanded in 1815. 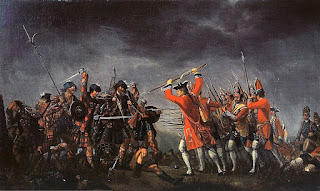 Calling the French soldiers "musketeers" is a bit of a misnomer since they were more cavalry than infantry, but pole weapons were still being used in combat well into the 18th Century. The Jacobite forces used claymores when storming the British in the '45 rebellion. Likewise, French and Indian troops used tomahawks and other hand held weapons with great success during frontier battles of the Conquest. Don't forget that bayonet is kin to the pole weapons where the firearm became a pole weapon.

English musketeers didn't use swords, instead they used their weapons as clubs!