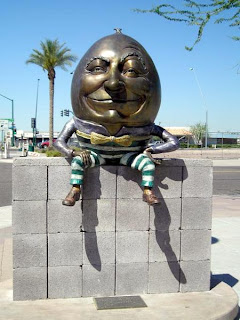 
In 1865, author Lewis Carroll wrote the following words in chapter 6 of "Alice in Wonderland":"When I use a word," Humpty Dumpty said in a rather a scornful tone, "it means just what I choose it to mean – neither more nor less.""The question is," said Alice, "whether you can make words mean different things.""The question is," said Humpty Dumpty, "which is to be master – that's all."Alice was too much puzzled to say anything, so after a minute Humpty Dumpty began again. "They've a temper, some of them – particularly verbs, they're the proudest – adjectives you can do anything with, but not verbs – however, I can manage the whole lot! Impenetrability! That's what I say!"

I could not help but notice the visual similarity, as well as other similarities, between radio host, Rush Limbaugh, and the nursery rhyme char acter Humpty Dumpty: 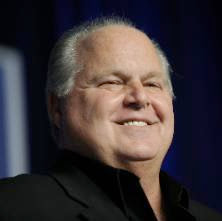 The similarity is not merely a visual coincidence; besides the more well known reference to a riddle which subsequently became the better known nursery rhym about an improbable 'egg', first published in the 19th century but dating orally to much earlier, Humpty Dumpty was also a reference to a cannon which supposedly blew up into fragments while firing from a castle in Scotland, the fragments falling to the base of those walls. The humorous photo similarity is self-evident. The visual comparison to the loved nursery character is offered as gentle humor. The other comparison, to an exploding cannon, is more serious.

It was well expressed by conservative radio host John Batchelor in his piece "My Party of Cowards" on the Daily Beast on June 1, 2009 (www.thedailybeast.com/blogs-and -stories/author/john-batchelor ). Limbaugh is indeed a loose cannon, more damaging to conservatives and the GOP than to the Obama administration and Senate Democrats in his recent accusations of Supreme Court nominee Sonia Sotomayor as a racist. Limbaugh would rather whip up a frenzy of fear and dissent over untrue statements about Sotomayor, than to encourage an objective look at the strengths and weaknesses of her actual background and performance as a judge. The reality is too dull, too dry, too bi-partisan to serve Limbaugh's divisive and inflammatory intentions.

Sotomayor made a comment during a speech in 2001, apparently referring to herself. She said ""I would hope that a wise Latina woman with the richness of her experiences would more often than not reach a better conclusion than a white male who hasn't lived that life." "Latina" and "Hispanic" are both terms that refer not to race, but to a very broad, inclusive group of people who share either the Spanish language, and / or a national origin from Latin America which encompasses multiple races. A more correct word for Limbaugh's specious accusation of Sotomayor is not a racist, but a bigot, which Random house dictionary defines as a noun, meaning "a person who is utterly intolerant of any differing creed, belief, or opinion." Racism, in contrast, is defined by one of my favorite references,=2 0the American Heritage Dictionary, as "The belief that race accounts for differences in human character or ability and that a particular race is superior to others" or secondarily as " Discrimination or prejudice based on race."

Sotomayor was advancing the premise that it as the rich experience of her background, rather than her gender or her familial geographic origins or her race that was the basis for arriving at a better, wiser conclusion. She elaborated further on this when she said "We are a nation that takes pride in our ethnic diversity, recognizing its importance in shaping our society and in adding richness to its existence. Yet, we simultaneously insist that we can and must function and live in a race and color-blind way that ignore these very differences that in other contexts we laud."

What also is not quoted in that regard is her statement that "No one person, judge or nominee will speak in a female or people of color voice. " These are clearly not the words of a racist, who believes in the racial superiority of any one group over another; nor are they the words of someone who is utterly intolerant of a differing creed, belief or opinion. An argument could be made that Sotomayor has an overly favorable opinion of her own background in comparison to a hypothetical white male who has not had the same struggles in his life, or one could argue it is an appropriate estimation on her part.

Given the statistics accumulated by the FBI regarding hate crimes in the most recent years for which statistics are available, there are only two categories where there has been an increase: 1. people targeted for what is believed to be their sexual orientation; and 2. people targeted for being, or being suspected to be immigrants from Hispanic / Latino countries. This includes immigrants and the descendants of immigrants, like Sotomayor, from Puerto Rico. I think this gives Sotomayor a reasonable basis on which to presume she has faced a different kind of challenge than would not be faced by the hypothetical white male in her quote. Recently someone who insisted Sotomayor was a racist, despite anything else she ever said or did beyond the 'latina woman /white male' statement, told me that "words have meaning".

Yes. They do. Sometimes more than one meaning, as so well expressed in an excerpt from the Led Zepplin song "Stairway to Heaven":"Theres a sign on the wallBut she wants to be surecause you know sometimes words have two meanings." That lyric expresses something that is common to both the left and the right, liberals and conservatives, Democrats and Republicans --- "code words" for what each side is supposed to REALLY mean.

When those on the right end of the political spectrum use the term "community organizer", the opposite end of the spectrum it is supposedly a euphemism for black; when those on the left end of the political spectrum use the word "empathy", it is a claimed euphemism for "activist". The one pattern that emerges is that words, from both sides, are not accepted as meaning what they say, but instead are defined negatively. It is always the opposite side which defines the meaning of the dreaded "code words".

The end result of misusing words to make inaccurate accusations, to obscure meaning instead of clear communication. It is beautifully summarized by returning to Lewis Carroll, "Alice in Wonderland", Chapter 10."I couldn't afford to learn it," said the Mock Turtle with a sigh. "I only took the regular course." "What was that?" inquired Alice. "Reeling and Writhing, of course, to begin with," the Mock Turtle replied; "and then the different branches of Arithmetic—Ambition, Distraction, Uglification, and Derision." "I never heard of 'Uglification,'" Alice ventured to say.

We certainly have plenty of Reeling and Writhing, Ambition, Distraction, Derision, and most of all, Uglification. Dictionaries define it as to make ugly; no two meanings about it.

fondly dedicated to K-Rod and SitD
Posted by Penigma at 12:23 PM

New comments are not allowed.