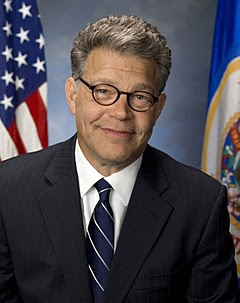 A short word on Franken vs. Romney, er, McFadden, the Romney clone

by Dog Gone on May 30, 2013 · 0 comments
It is premature to assume that Mike McFadden, Sunfish Lake MN, will be the right wing candidate to run against Al Franken.

But since he is the first to declare his desire to run, and has given a quote that is featured on an MPR News Question of the Day, it is worth a look:


The question is “How do you rate Al Franken as a U.S. Senator?”


MPR then followed up with this bit of coverage to Franken’s only declared competition so far:


[Mike McFadden] also outlined a campaign message that will focus on education, jobs and reducing the national debt.”
“I mean, we still have this stagnant economy. We have a massive amount of debt. Al Franken has now been in the Senate for four and a half years, and I have not seen any improvement in that,” McFadden said. “And then when I look at education — I think our education system is abysmal.”


Jobs. Economy. blah blah blah.  It is the same old bait and switch bullsh*t we hear all the time from candidates who are more interested, as a party, in pursuing a culture war agenda.  No one has seen anything of value come out of the GOP, at the local, state, or federal level so far that has either improved the economy, or growth, or jobs.  The right has NEVER done a good job of reducing the national debt; they have in fact been conspicuous for exploding it, not just expanding it, and then not paying for it. They do bad things in the name of education, which they also classically have NOT paid for, and they promote backward bad education that promotes religious ideology over secular quality education.

That is why we have the debt and deficit problem we do.  And apparently McFadden isn’t paying attention to those pesky facts – which most conservatives avoid like the plague – because that has been significantly reduced since both Obama and Franken have been in their respective offices.

The right can complain about Tax-and-Spend Democrats, but at least the Dems fund what they spend, balance budgets, and incidentally have a consistently better track record for economic growth and job creation.

If you need an example, you have only to look at the Romney-esque/Lyin’ Ryan economic  policies practiced next door in Wisconsin.  Where under Dayton and the Dems Minnesota is 12th in job creation, Walker’s Wisconin is ranked 44th, down from 42nd. THAT is the difference between right and left wing policies.

Educationally, we also outperform Wisconsin.  The Center for Applied Economic Research had some of the best and most in-depth measurements comparing states in education performance.  There was only one category where Wisconsin outperformed Minnesota, based on 4th graders performing at or above grade level, and in that category, both WI and MN ranked in the top 5.  In the other categories: Teacher quality, Minnesota ranked 23rd, Wisconsin 34th; Education Input, which looks at teacher salaries, student/teacher ratios, etc., Minnesota was 16th, Wisconsin 23rd; Education Social impact, which looked at per capita income, percentage of population with college degrees, and library use, Minnesota ranked 9th, and Wisconsin ranked 22nd; Education efficiency, measured by cost per student, and performance in 4th grade test results, Minnesota ranked 12th, and Wisconsin ranked 25th.  So…..McFadden’s claims about Minnesota education being abysmal appears to be poorly informed, as are right wing education policies, typically.

Looking at the legislative accomplishments of Al Franken – which far outstrip Tea Party Queen Michele Bachmann’s -  here are just a few that address the issues of education, teachers and principals, schools, and both children from pre-school through adult students, from govtrack.us  where you can see the rest of what he has done for the nation as a whole, the economy, and for Minnesotans.

The prevailing opposition from the conservative voters to Franken seems to be that he duplicates what AKlo does; he doesn’t, they sponsor different legislation.  But given how popular she is, and that she beat her GOP opposition by a margin of 35% of the vote, that isn’t much of an accusation against Franken’s performance.


But then we know the facts are pretty much never on the side of the GOP, and are completely beyond the grasp of the Tea Party.