The Myth of Guns

mikethegunguy asks "Why are Americans Buying All Those Guns?" 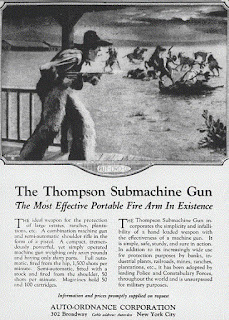 His answer relates to a survey that was made by sociologist David Yamane which says that people who are undecided are what is driving sales.

My answer is much more simple: it's the myth of guns.

That is Guns are the best way to defend yourself.

You won't be a victim if you have a gun is the basic premise of the "gun rights" movement.

It's the image shown in this Tommy Gun ad, where the rancher single handedly fights off the band of desperados. While the NFA made fully automatic weapons hard to come by, there is the semi-automatic substitute out there. Sure that is hard for lazy ass Americans to tolerate since they have to pull the trigger for each round fired, but what the fuck the things have worked well in mass shootings.

The peaceful protests were the best thing that could have ever happened for the firearms industry and the "gun rights movement" since one of the chants was a variation on the theme of "defunding the police". That leads to the question of who are you going to look to to protect yourself if the cops aren't around.

Or they send a social worker to your house.

Never mind all the studies out there about how having a gun really isn't good on the self-defence front. And that it is idiotic to NOT be regulating who can get their hands on them.

Seriously, nothing like getting killed with the gun you bought for self-defence, which was what the studies were showing before the freeze on "gun violence research".

The problem is that the debate on this issue has not been fueled with accurate information. It has been highly emotionally based if anything which is as far from facts as you can get. That is the real point of mikethegunguy's post and this one.