Imagine my surprise seeing this headline in Le Figaro after listening to gun nuts extol how the US is the beacon of "gun rights" and gun ownership. Here's the link, but you need to:

to be able to read the article. 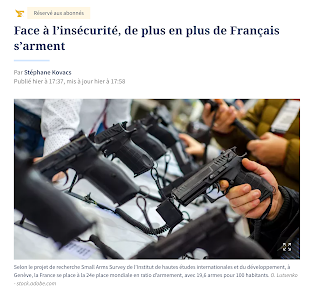 Yes, the French aren't "victims" to use the Gun Culture paradigm since they can get a firearm for protection. Sure, they have to undergo some form of serious background check before they can get permission to own them, but France is in 24th place for armed citizenry in the world with a ratio of 19.6 guns per 100 inhabitants. Or 12 million weapons in civilian hands in France.

Anyway, it was amusing to see an article like this in a French newspaper since the gun nuts like to claim that the US is somehow "unique" in the ability to own firearms. This article could have come from a US newspaper, which is the source of my amusement. Here are a few excerpts:

"Stop hoplophobia", chanted the activists of the Association for the Restoration of Citizen Carry of Arms (Arpac). Hoplophobia? "The irrational fear felt by some people at the mere mention of a weapon, where a normal person distrusts the one who carries it," they say. On Facebook, their page has more than 45,000 subscribers - three times as many as five years ago - who promote self-defence and the carrying of weapons for "responsible citizens". With a firearm, "you are no longer a victim, but an actor in your own safety", they insist...

Does he see himself shooting a potential burglar? I'm going to take all the necessary measures to prevent that from happening," he says. I'm going to install an armoured door and close the shutters every night. But I can imagine myself taking the gun out of the window and firing it into the air to scare the attacker. What is not possible is to stand by and do nothing...

Marie-Hélène, who lives alone in her house in the heart of a small town in the Hérault region, has the same desire to be safe. During the lockdown, "in the middle of the night, the municipal police rang my doorbell: they had seen a man loitering near my gate", reports this 60-year-old widow.

I think the "uniqueness" is less in the ability to own firearms and more in the irresponsible manner that they are owned in the United States. Or as the police advice mentioned in the article says:

Don't shoot if the man happens to be passing through your garden. You would be in more trouble than the offender.