OK, I am going to start this off by saying I was totally supportive of BLM when it was about Trayvon Martin, Jordan David, and "Stand Your Ground" Laws. In fact, my attitude about current events is totally related to my attitude about "Gun Violence Prevention". Which is why an interaction which started with the following post in a Facebook Group, possibly something called Occupy the NRA, led to my distrust for the group: 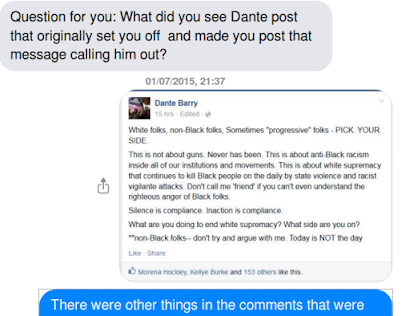 OK, you can guess how this interaction is going to turn out and I don't need to say more, but there is more. I wanted to know who the fuck this guy was, especially since he was posting in a GVP group. Alas. I didn't screencap very much of this and I either left the GVP group or was thrown out of it. The next cap of a conversation with someone else who was a party to this is useful since this has become pretty much hearsay.

Now, I need to make a historical explanation if people wonder about my attitude toward Tulsa and all this. First off, I have a problem with the black victimhood narrative. If anything, that is the racist narrative straight out of D.W. Griffith's Birth of a Nation where the blacks are all cowering as the KKK rides to terrorise them.

And it's not exactly true. Blacks did fight back. The Colfax Massacre is one instance that comes to mind, which led to first Second Amendment case of US v. Cruikshank, 92 U.S. 542 (1876), Which is an aside, but blacks did fight back with varying success. But my opinion of armed resistance is that it is counterproductive, which is probably why the Tulsa thing will probably evaporate as will reparations.

The gist of all this is that the post in question happened after the Charleston Church Shooting (18 June 2015). The topic of armed resistance was brought up with hashtags such as the ones mentioned. Lots of reasons why I would react the way I did to the post. In fact, I was surprised that very few people were questioning what was said since having GVP people appear to approve of "armed resistance" could be used against the GVP movement.

In fact, as someone on the left, I question any time anyone on the left advocates violence since they could be an agent provacateur. Or at least someone who wants to discredit the movement. And yeah, as the person I was discussing this with said, I am quite willing to speak my mind, which I did to Dante.

OK, I'm a racist in the minds of people like Dante and nothing I will say really matters: no matter how factually based it may be. But gun violence is something which is hurting the black community. A lot of the critics of the BLM movement point out the innocent children killed in the crossfire.

I'm more than willing to call it out if blacks contributed to the escalation of violence in Tulsa. In fact, maybe we should be looking at the restoration period and how and why it led to Jim Crow. Henry Louis Gates Jr. PBS series for an eye opener on the topic of reconstruction.

Anyway, not much is going to happen if there is name calling and antagonism when we are trying to have a discussion to solve this issue. In fact, it probably won't get solved if we don't simmer down and talk with cool heads.