Putin is a definite narcissist.

Narcissists have a hard time admitting defeat or that they were wrong. Argue with my ex-wife is you don't believe me. Anyway, the drama seems to have toned down. So back to the Russian overt narc.

People are beginning to believe the Ukrainians when they releast the casualties and losses for the Russian army. 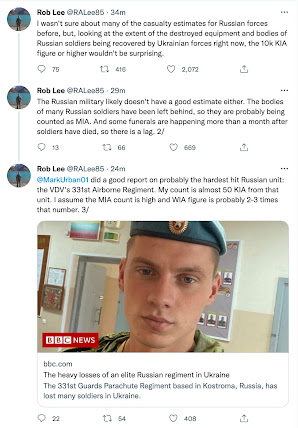 Ukrainian kids grow up hearing how their parents, grandparents, and Greatgrandparents fought the Germans and the Russians. It's the home of the partisan Otriads from Defiance. Of course, they are kicking Russian ass.

As for Nato expansion, all the former Eastern Block countries get it. The current spate of war crimes in Ukraine show why the West should have been doing all it could to supply the Ukrainians in the war to save their homeland.