Revisionist history is when someone rewrites history so that it is less factually accurate, but presents instead an account of history which is a lie by either omission or commission so as to present someone in a more favorable light, or to present the events the way they wished they had happened.

How much Dean has embarrassed the Republican and the rest of the right is measured by the extent to which they have tried to make the whole incident disappear, including from any formal record.  I think this is a good measure of what kind of legs this scandal potentially has.  Perhaps the GOP leadership is unaware of the possibilities of the record of that prayer being on sites like Youtube - or here and on other media.

We have yet another instance of revisionist history in the Republican treatment of the Friday May 20th Bradlee Dean Prayer scandal according to the STrib:


GOP scrubs mention of prayer
Pastor who gave Friday's controversial invocation disappears from the record.
House DFLers are upset that a legislative journal scrubbed mention of the controversial religious leader who gave a divisive prayer before Friday's floor session.
Democrats on Saturday wanted to know why the Journal of the House, the historical record of the day's legislative work, had no mention of pastor Bradlee Dean offering the prayer. Dean had said that Jesus Christ is the "head of the denomination ... as every president up until 2008 has acknowledged."
"I am not trying to make this a difficult thing, but I think it's important to have this civic discussion," said DFL Rep. Terry Morrow, who questioned the omission of Dean's name on the House floor.
Republican Speaker Kurt Zellers, who took the unusual step of publicly apologizing to House members Friday after the prayer, said the omission wasn't out of line because no quorum was present when Dean spoke.
Dean's prayer caused such an uproar that Republicans restarted the session and had the Rev. Grady St. Dennis, the House chaplain, give a new prayer. The official House journal lists St. Dennis as offering the Friday prayer.
Zellers said the Pledge of Allegiance and the prayer are a custom on the House floor, but that they are not technically part of the session. Omitting Dean's name doesn't pollute the accuracy of state records, he said.
"It was my decision, and I stand by my decision," Zellers said.


First of all, there have been plenty of instances where the legislative journal has included accounts of events in the legislature where no quorum was present; that is not a valid or legitimate criteria for scrubbing this embarrassment to the Republicans from the official record.


Secondly, I challenge Zellers claim that a quorum was not present, as roll call was mentioned in accounts of this scandal as having taken place - twice - once before the prayer by Dean, and again before the SECOND prayer, by St. Denis.


Thirdly, if the basis for removing the Bradlee Dean reference from the journal is because it was not part of the session.......why is there a mention of St. Denis offering the prayer, and why has there been other mentions of people offering the prayer?


No, this is one thing and one thing only.  Zellers is trying to expunge a formal reference to actual historic events which he doesn't like.
If he is allowed to do this, then what else will he and his Republican colleagues make disappear?  This isn't the first time that they have done that; there were inadequately explained absences of recordings before, as I recall, over ethics violations.

What kind of transparency and accountability do we have when someone like Zellers can abuse his authority with the apparent support of the Republicans in the legislature, since no one has publicly spoken out opposing it from that side of the aisle? We have NO accountability or transparency with this kind of revisionist history taking place - and  make no mistake, expunging events that occurred from the record without justification (say, an actual error of fact for example) IS revisionist history.

More than that I think this reflects how much Bradlee Dean and his right wing extremist fringe supporters are an embarrassment to the GOP, and what kind of damage they anticipate that fringe can do in the upcoming election to their equally extreme candidates.

Welcome to the electronic age Mr. Zellers; you can't put that genie back in the bottle, certainly not by trying to censor your embarrassing scandal out of the public record.

Bradlee Dean is offensive, but he is pure Republican / Tea Party all the way.  He is yours Mr. Zeller; OWN HIM as the creation of your party.  You didn't condemn him before, it's way too late to do it now.

Dean is not only hateful to homosexuals, and roman catholics. This is who you are aligned with, however embarrassing it is - or should be:

and this
and lets not forget how he portrays homosexuality as a crazy Muslim plot:
And he doesn't stop attacking Roman Catholics with just the horrific anti-Christ claims either:
Bradlee Dean and his right wing supporters are wacko nut jobs.  But he is a wackadoodle that appeals to your side of the aisle, along with those who support the birthers and other conspiracy crazies - which includes Michele 'anti-American, re-education camps' Bachmann.  You brought this on yourself Zeller, you and your party, along with the Tea Partiers, by approving and encouraging the voices on your part of the political spectrum who promote ideology, including crazy ideology, over a fact-based reality-based world view.  Your chickens, Mr. Zeller have come home to roost; and Bradlee Dean has laid you a big fat stinking rotten egg.  You're stuck with it Mr. Zeller

You're stuck with him too, Michele Bachmann - not that she minds much.  Dean is her kind of nutjob.  This is what a Christian theocracy would look like; just listen to these fringies.  And then look at who has been supporting them, who is pleased to invite them to the Republican convention, who works to drum up donations to fund their luxurious life style. like the $399,000 Dean house up for sale, below.  Worst of all, look at who supports their lunatic revisionist history version of the Constitution. 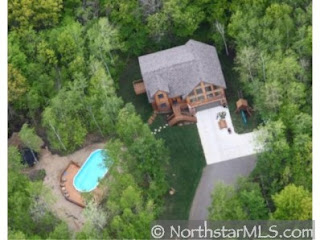 The politically partisan right in Minnesota, and nationwide for that matter, need to find someone to act the way that William F. Buckley, Jr. did when he began the purge of the party of extremists like the John Birch Society in an earlier era.  They need to distance themselves from giving extremist nut-jobs like this Bradlee Dean legitimacy, instead of disowning moderates like former governors Arne Carlson and Al Quie.  The extremists on the Right are WRONG, and the Right would do well to disown and condemn ALL of those extremists.  But they do not.
Posted by dog gone at 9:32 AM