OK, I strongly believe that Sanders would have won the 2016 Election had he been allowed to run. He was the people's candidate in that he ran on small donations. He also got people energised.

Whatever the case, that is moot since the Democrats made it clear they preferred to lose with Clinton than Win with Sanders.

I don't need anyone to tell me what I saw was due to Russian Influence: there is more than enough documentation of how the Democrats tried to silence dissent throughout the election.

Anyway, I make it obvious I like to play with the interactive maps at 270towin because one of the underlying assumptions of the "Russian Influence" argument is that the popular vote mattered (it didn't).

Take the actual results of the Electoral votes: 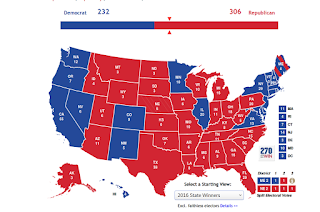 Now superimpose this map of where the results were considered close: 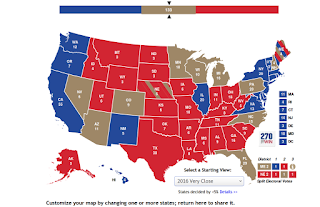 it puts paid to the argument that Michigan, Pennsylvania, and Wisconsin were the three states that somehow "mattered" in the election. It also shows why the pundits were saying that Clinton would win in a landslide in the electoral college (remember, most states are winner take all no matter what the actual result would be).

On the other hand, it show how silly the "Russian Influence" and "Third Party voter" arguments are to the actual results in the Electoral College. Clinton could have won with a couple of the close states.

Also, this shows that the Electoral College leads to a national race and protects smaller states arguments are wrong. 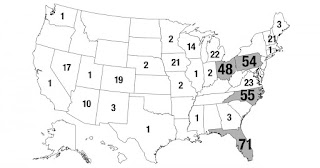 
94% of the 2016 events (375 of the 399) were in 12 states (the 11 states identified in early 2016 as "battleground" states by Politico and The Hill plus Arizona). This fact validates the statement by former presidential candidate and Governor Scott Walker of Wisconsin on September 2, 2015, that “The nation as a whole is not going to elect the next president.

BTW, Clinton could have won the election if she had Electoral College wins in North Carolina and Florida, the two states with the most campaign events.

Any attempts at influencing the elections by a foreign power would be difficult given the distortions of popular vote by the Electoral College.

Anyway, the bottom line is that Clinton was a poor candidate who ran a bad campaign.

You can't blame the Russians for that. Unless you want to tell me that the DNC is somehow part of the Russian Plot.

See also:
Two-thirds of Presidential Campaign Is in Just 6 States
FairVote: The Electoral College
Electoral College Distortions: "Winner" could lose popular vote by a landslide
Posted by Laci The Dog at 10:29 AM