OK, the first question you need to get around is why did Hillary Clinton lose the election? She won the popular vote by one of the largest margins EVER in an election. That is nearly 3 million votes.

Where she lost the election was in the electoral college, which is an institution found in the US Constitution. You can find it in USC Article II, Section 1, Clauses 2-4 along with the 12th Amendment. The fact that this institution was changed early on in the republic (1803-1804) demonstrates its problematic nature.

Toss in that Clinton could have gotten enough votes in the electoral college by:

The 2000 Election focused on Florida, but a popular vote win for Gore in Ohio could have also led to his victory (see https://www.270towin.com/2000_Election/interactive_map). The 2016 narrative focuses on Michigan, Pennsylvania, and Wisconsin, but is flawed since none of those states were solidly for Clinton. Michigan and Wisconsin went for Sanders in the primaries. I would toss in the result of the 2008 Michigan primary where:


"In Michigan, where Obama and other candidates removed their name from the ballot, Clinton won against "Uncommitted" (i.e., a vote for nobody) 55-40%. Exit poll respondents said that if all candidates had been on the ballot, they would have voted 46% Clinton, 35% Obama, 12% Edwards, 3% other."

I definitely would not call Michigan solid for Clinton in 2008 and 2016. But the Dems made it clear they preferred to lose with Clinton than possibly win with Sanders. But that's another post.

The bottom line here is that no one state's popular vote would have gotten Clinton the presidency. Additionally, it was a chance to expect Michigan and Wisconsin to vote for Clinton.

Next we get to the Clinton supporters who made it clear that Donald trump would not be President:

I would also add the Clinton Supporters who said things like: 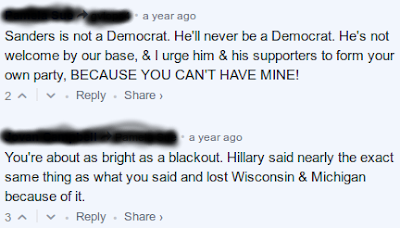 Next we have allegations that the Democratic National Committee rigged the Election against Sanders. And from what I get, the e-mails which have been alleged to have been provided by Russia were internal Democratic Party messages. These messages were not new revelations, but pretty much a confirmation of what was being said about the DNC being biased for Clinton.


If anything, the "Russian Bots", or whatever the fuck you want to call them, were basically using the failings of the US system of elections against itself.

So, maybe there were Russian bots, but nothing a foreign power could do would have screwed up the 2016 elections worse than what internal US forces did. And the really sad thing is that a lot of these things could have been avoided have the election been run with fairness principles which have disappeared over the last 40 years.

So, the real joke is on the comedians who gave Trump far more publicity than he deserved because of ratings.  Are those people Russian bots?

Anyway, you have to prove beyond a reasonable doubt that Russians did indeed cause a Trump win.  Using that standard, you've lost the game before you've even started.