Why?  Because we have a large Finnish American population in this state...and because most of those who will be celebrating St. Patrick's Day on Thursday are not necessarily Irish either.  But most of all, because it is simply fun, I offer our Penigma readers this, from sainturho.com 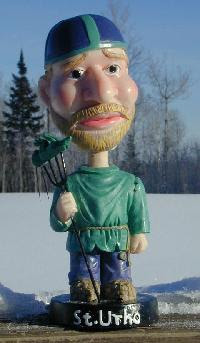 St. Urho is said to have chased the grasshoppers out of Finland, thus saving the grape crop.

The legend of St. Urho originated in Northern Minnesota in the 1950s. However, there are differing opinions as to whether it began with the fables created by Sulo Havumaki of Bemidji, or the tongue-in-cheek tales told by Richard Mattson of Virginia. Either way, the legend has grown among North Americans of Finnish descent to the point where St. Urho is known and celebrated across the United States and Canada, and even in Finland.

St. Urho's Day is celebrated on March 16th, the day prior to the better known feast of some minor saint from Ireland, who was alleged to have driven the snakes from that island.

The legend of St. Urho says he chased the grasshoppers out of ancient Finland, thus saving the grape crop and the jobs of Finnish vineyard workers. He did this by uttering the phrase: "Heinäsirkka, heinäsirkka, mene täältä hiiteen" (roughly translated: "Grasshopper, grasshopper, go to Hell!"). His feast is celebrated by wearing the colors Royal Purple and Nile Green. St. Urho is nearly always represented with grapes and grasshoppers as part of the picture.

So enjoy a glass of grape juice or a glass of wine, in preparation for tomorrow's green beer or Irish whiskey, and have a good chuckle.  We have plenty of ersatz holidays in the U.S.; this is as legitimate as many of those - and yes, there are greeting cards for the occasion, if you know where to look for them!  (or, if you have even the most basic grasp of a search engine)