"The idea of having an international women's day was first put forward at the turn of the 20th century amid rapid world industrialization and economic expansion that led to protests over working conditions. In the West, International Women's Day was first observed as a popular event after 1977 when the United Nations General Assembly invited member states to proclaim March 8 as the UN Day for Women's Rights and International Peace"

The first countries to celebrate :


"The first International Women's Day was observed on March 19, 1911, in Austria, Denmark, Germany, and Switzerland, where more than 1 million people attended rallies calling for women to be given the right to work, vote, and hold public office."

There is also an International Men's Day, November 19th.

There should be no question that the history of this specific date, which was later celebrated as a week, and now as an entire month, has close ties to the earlier struggle of labor to organize.

As such, it is an important context to the struggles in Wisconsin and a number of other states are in essence re-fighting these battles, per Daisy Sindelar at Radio Free Europe and Radio Liberty:


Rosalind Rosenberg, a professor of history at New York's Barnard College, says the holiday was created as the country's workers, including large numbers of women, were losing patience with poor labor conditions.

Early American women's activist Rose Schneiderman speaks at a union rally around 1910. "I would date it back to 1908 and the strike of some 15,000 women in the garment industry on the Lower East Side who were suffering low pay and terrible working conditions, and who walked off the job and protested," Rosenberg says.


Among their complaints was the fact that employers refused to recognize workers' unions.  "Unionization is such an enormous issue in the United States today," Rosenberg says. "It's poignant to think about this 100th anniversary in that context."

This year, President Barack Obama proclaimed March 2011 to be Women's History Month and called on Americans to mark International Women's Day by reflecting on "the extraordinary accomplishments of women" in shaping U.S. history.

And dozens of U.S.-based organizations focusing on women's issues are planning special events. One is Women for Women International, which sponsors women in war-torn countries like Afghanistan, Iraq, and Sudan.

I cannot help but notice how many of the unions represented by the protesters in Madison, Wisconsin appear to include large numbers of women in the photos, and which I would expect mirrors the male / female demographic of those unions. 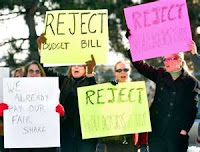 Given the focus of some conservatives against teaching science,
or in favor of teaching factually flawed revisionist history, it makes a
certain amount of sense that teachers unions would be targeted for attack.

Recognizing that women have traditionally earned less than men for the same skill and the same work, and continue to earn less despite advances, it makes sense that women make up a significant demographic of the target by conservatives.  Women in every aspect of their lives are facing conservative culture war attacks; collective bargaining which helps level that playing field are a logical target. 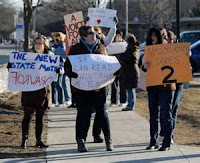 Let us profoundly hope that the 100th anniversary of International Women's Day, and the proclaimed Women's History Month do not record major step backwards for labor OR for women workers. The rest of this nation is watching; the rest of the world is watching what we do here. 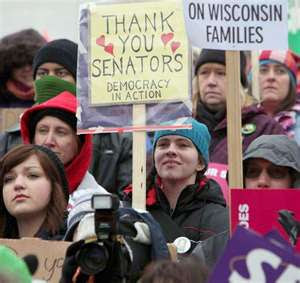