Vicious Psedo-patriots - We Aren't the Only Country with These People: Japan

In covering the devastating events in the Pacific Rim, currently most of it in Japan, I was shocked momentarily to see these words here:


The outspoken governor of Tokyo, Shintaro Ishihara, told reporters Monday that the disaster was "punishment from heaven" because Japanese have become greedy.

Previously, I had thought the not really a church Westboro Phelps family had found the lowest level to which human beings could sink in the name of spirituality.  No. The governor of Tokyo seems to be in competition, and maybe to have exceeded their ugliness and lack of human decency.


I would like to take a moment here, in the midst of my prayers for those who are suffering from this natural disaster, to condemn Governor Shintara Ishihara's world view and personal ignorance and lack of understanding.  I can only hope that whatever mechanism put him in his position, once the more urgent matters are attended to, that he will be removed, as quickly and as ignominiously as possible.

Not surprising, looking further to see what this man was like, I came across this site and this image, as I read about the international influx of humanitarian aid that showed up his words as lies: 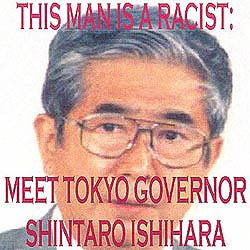 In an April 9, 200 address to the Japanese army, he tells troops that "Atrocious crimes have been committed again and again by sangokujin and other foreigners. We can expect them to riot in the event of a disastrous earthquake."

The last time Tokyo had a disastrous earthquake, in 1923, ultranationalist-led mobs took the opportunity to track down and kill thousands of the stricken city’s Korean residents.

Ishihara’s use of the 50-year old derogatory term "sangokujin" (an English-language equivalent would be "nigger") is especially disgusting.

I cannot help but wonder how much Ishihara's ideology would parallel that of some of our political figures, like Reps. King, or Bachmann, or former congressman Gingrich or former governor Huckabee.  Because it seems like the claim of super-patriotism is used routinely to put lipstick on the ugliness of the pig-like ideas of the ultra-nationalist anti-anyone-not-'us' ideology.


Ishihara is generally described as one of Japan's most prominent "far right" politicians.

How does he parallel OUR right wing extremist politicians?


On February 20, 2006, Ishihara also said: "Roppongi is now virtually a foreign neighborhood. Africans — I don't mean African-Americans — who don't speak English are there doing who knows what. This is leading to new forms of crime such as car theft. We should be letting in people who are intelligent."


In 2000, Ishihara, one of the eight judges for a literary prize, commented that homosexuality is abnormal.

And like Rep. King, who wants to promote a sanitized, revisionist version of history:


In 1990, Ishihara said in a Playboy interview that the Rape of Nanking was a fiction, claiming, "People say that the Japanese made a holocaust but that is not true. It is a story made up by the Chinese. It has tarnished the image of Japan, but it is a lie."[23] He continued to defend this statement in the uproar that ensued.... He has also backed the film The Truth about Nanjing, which argues that the Nanking Massacre was propaganda.


Governor Ishihara once claimed that Korea under Japanese rule was absolutely justified due to historical pressures from Qing Dynasty and Imperial Russia.

That last rather reminds me of Mike Huckabee who doesn't believe the British should be held accountable for their inhumane conduct during the Mau Mau rebellion.  Just pretend it didn't happen - like denying the 'Rape of Nanking', or the killings of civilians by the IRA.  Or pretending they were lucky to have the British in Kenya taking their land at the time.


Ishihara said in a 2001 interview with women's magazine Shukan Josei that he believed "old women who live after they have lost their reproductive function are useless and are committing a sin," adding that he "couldn't say this as a politician."

Because apparently the right wing world-wide believes women are subordinate to reproduction, and if they don't acquiesce, they are sinners.  Sin, and paranoia, and faux patriotism seem to be constants on the far right.


Governor Ishihara once claimed that Korea under Japanese rule was absolutely justified due to historical pressures from Qing Dynasty and Imperial Russia.

Gee.....how reminiscent of Mike Huckabee and the birthers, with their xenophobia:


On April 17, 2010, Ishihara said "many veteran lawmakers in the ruling-coalition parties are naturalized or the offspring of people naturalized in Japan".

I hope that Ishihara is not just eating his words from earlier and from now,  but choking on them.  I can only hope our right wingers see this, and recognizing the similarities, do the same.
Posted by dog gone at 3:16 PM