Getting Screwed, with Real Screws!

I would call our readers' attention to one of the blogs listed on our blog roll, an EXCELLENT site for those who are interested in the U.S. economy, in politics, and in issues like unemployment and deficits.  That site is the Alliance for American Manufacturing.  Read it; read it regularly. They have an excellent article on currency manipulation which is pertinent with the G20 meetings coming up soon:


"But what exactly is this currency manipulation problem?

Starting in 1994, China began to explicitly peg its currency, the yuan, to the dollar at a set, low rate. No matter if the dollar rises or falls, the Yuan remains in place with the dollar. And since the Chinese economy has been growing faster than the U.S. economy, the result is that the yuan has remained significantly undervalued. This makes China’s exports to the U.S. relatively cheaper than they should be and also makes U.S. exports to China more expensive.

The main consequence is that a flood of artificially cheap Chinese imports has driven many domestic U.S. manufacturers out of business. In fact, the U.S. trade deficit with China has risen from $30 billion in 1994 to as high as $268 billion in 2008. China's policy of currency manipulation is intentional, and has helped it become the world's leading exporter.

But along the way, it has also earned the ire of the EU, Japan, and the WTO for continuing what is essentially an illegal practice. As long as China's currency remains significantly undervalued, Beijing will continue to enjoy sizeable exporting benefits. Unfortunately, the repercussions of this are a growing distortion in world markets."

In other words, we in the U.S. are having to compete with China on a tilted playing field rather than a level, fair playing field. Our manufacturers have to compete under an unfair handicap of currency valuations. We have had growth in manufacturing, but we should have had more growth for the effort:


The U.S. had the sharpest increase in manufacturing productivity — output per hour of work — in 2009 of the 19 industrialized economies for which the U.S. Bureau of Labor Statistics keeps data: 7.7% 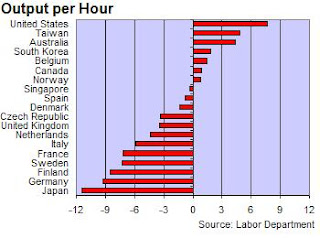 We are having to struggle with our hands tied, in effect - because of REPUBLICANS.

Currency manipulation and our trade deficit is as important to our economy as our budget deficits; in terms of recovery for our economy, more so.

Campbell Fittings, a maker of precision screws and couplings used by petrochemical, mining, and construction companies, is nothing if not efficient. A typical employee in its factory in Boyertown, Pennsylvania, supervises two machines that each stamp out a new screw every 12 seconds. Yet its Chinese competitors sell nearly identical screws in the US for at least 40 percent less—well below what Campbell pays for raw materials. It's no secret why: For years, the Chinese government has kept the yuan trading at 40 percent below its true market value, making its exports that much cheaper. "I can fight companies," says Joe McGlynn, Campbell Fittings' vice president. "I can't fight countries."


"Senior House Republicans are putting the brakes on the Currency Reform for Fair Trade Act of 2011, a bill that would make China's currency practices punishable under US law. They oppose it, says an inside source familiar with the negotiations, because "US multinationals with operations in China really don't like it." These mega-companies fear that China will retaliate by crimping access to its markets—not to mention that their manufacturing operations in China will make less money selling goods back to American consumers without the subsidy." (my emphasis added - DG)

This begs the question, who do the Republicans represent in our representative government?  Their constituents, who are American Citizens, or big business, including foreign big business.  Remember all that fuss during the 2010 elections about donations and the money spent by the United States Chamber of Commerce?  This is where that money comes into question, and the loyalty to Americans of the Republicans who benefitted from campaign support, both directly, and indirecty by PACs  and also through lobbying.


"I think it is fair to say that Wall Street firms seeking financial business in China, and multinationals like Caterpillar with big manufacturing activities in China, have lobbied both Republican and Democratic administrations against action," Morici says. "Goldman Sachs' and Caterpillar's interests are more aligned with China than with the US economy."

This goes hand in hand with the outsourcing of American jobs overseas, especially manufacturing jobs, another hot topic that the conservatives have refused to address, including tax loopholes which actually BENEFIT sending jobs overseas.  Which is what the wealthy DO with all the money from their tax cuts.

But it is terribly important to our conservative politicians to take away salaries and benefits from union workers, union workers who take less money in salaries so they can have good medical and retirement packages.

This is not a pro-business approach by Republicans and Tea Partiers.  This is just a cheap sell-out of the American people which will incorporate anything into their agenda which will hurt the middle class, and will impoverish more Americans while stuffing money hand over fist into the pockets of the uber-wealthy.

The Republicans - and their Tea Party sidekicks - don't give a rat's rump about the voters in this country.  They try to distract them with culture war legislation, while doing everything they can, like political prostitutes, to please the big money holders of the purse strings.

The only question remaining is how long will it take the fools who voted them in to see the reality - this time.

It is to the  credit of the Obama administration that manufacturing has been steadily growing, in spite of the GOP and the Tea Party.  But we could do so much better, if it weren't for the impediments put in our nation's way by the right.
Posted by dog gone at 6:34 AM