Social Security should have a surplus.  Republicans and Tea Partiers, like Rand Paul, tell us the money was spent, and they want to change benefits and the retirement age.  They hate what they like to call 'entitlements'; they never liked them.  Like unions, they have been looking for pretexts to get rid of it.

So..........where is the money, and who spent it?  Having spent it, why the hell do they think it is acceptable to simply say, so sad, too bad, and for the government not to pay it back?

Lets take a look at when the money started being spent.  That would take us back to George H.W. Bush.  It continued under the next president, Bill Clinton; but to his credit, Clinton presided over a booming economy, and handed over a surplus to the Shrub, George 'Dubya' Bush.  And that appears to be where the spending went nuts, blowing the balance of the Social Security money with his wars and most of all, with his ill-conceived tax cuts ---- the ones that benefit the wealthy very few, so very, very much more than anyone else.
Let me remind you how much the Democrats had a different taxation program than do the Republicans - and Tea Partiers: 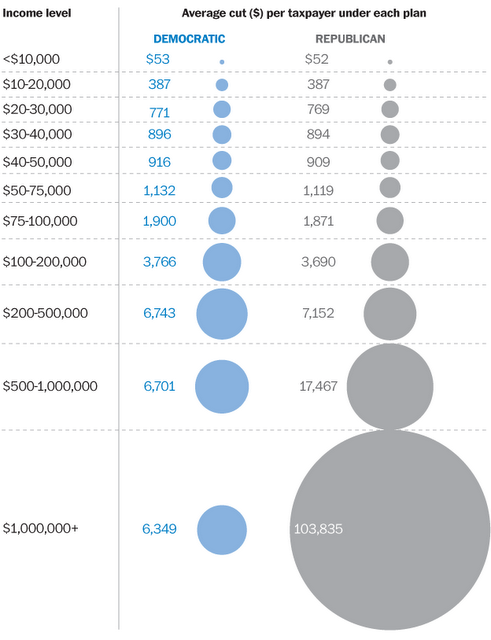 That would be........the baby boomers.  There are  quite a lot of baby boomers, they are no small demographic.  They are aging, and as they do, they are a force to be reckoned with at the ballot box.

To reprise the history:


"The baby boomers have contributed more to Social Security than any other generation," says economist Allen W. Smith. "They have prepaid the cost of their own retirement, in addition to paying the cost of the generation that preceded them."

Smith points out that the baby boomers have kept their end of the bargain, which was proposed by the Greenspan Commission and enacted into law in 1983. "The higher taxes that were part of the 1983 'solution' to the baby boomer problem have generated the annual Social Security surpluses anticipated so far, and they will continue to do so until 2018," Smith said.

According to Smith, by 2018, the baby boomers will have paid enough extra taxes to have generated a $3.7 trillion reserve in the trust fund, which would be sufficient to pay full benefits until 2042 when the youngest of the boomers would be 78 years old.

"Despite these promises, President Bush has been raiding the trust fund since he took office," Smith said, "and he no longer tries to conceal what he has done. In an effort to muster support for his privatization proposal, he has been openly admitting to the raiding of the fund."

As one of those who has been contributing those higher tax contributions into that trust fund, I want that money.  I will not accept being told "too bad we spent it, you are S O L" by Republicans and Tea Partiers like Rand Paul.  Pay it back, pay it back NOW, and if that means you have to end the damnable Bush Tax Cuts to the wealthy to do that, I don't care.  The wealthy may try to keep you on a short leash, Rand Paul, but that is your problem, and your cronies problem.

Don't even think about making it my problem.  I vote.  I write.  I am willing along with the baby boomers to go boom on your behind.

Let that spending of the Social Security Trust Fund become part of the George W. Bush failed presidential legacy.  Let the Boomers take the lead in condemning him to history; I'm sure we won't be the last, or the only ones to do so.  And Tea Partiers, like Rand Paul? Be on notice, about that missing money? Better start coming up with ways to pay it back, not change the goal posts on us.
Posted by dog gone at 8:42 PM