A tip of the hat to the excellent piece on the Alamo at the blog (on our blog roll!) NotionsCapital. Thanks to Mike Licht for the link to the Texas Slavery Project, and for this illustration: 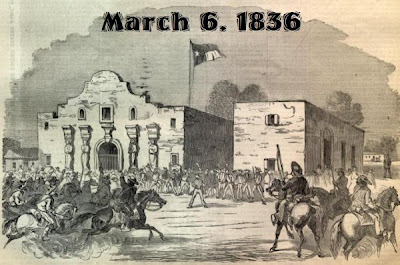 I grew up on the Dinsneyfied / sanitized version of the events at the Alamo, with no mention of slavery.

Not surprising that it is Texas where there is an active secessionist movement - and has had for some time.  They're not done with what they were trying in 1836:


In April 2009, Rick Perry, the Governor of Texas, appeared to endorse a resolution supporting Texan sovereignty at a Tea Party in Austin, Texas, following a question from a reporter.

There's a lot of different scenarios. Texas is a unique place. When we came into the union in 1845, one of the issues was that we would be able to leave if we decided to do that.... My hope is that America, and Washington in particular, will pay attention. We've got a great union. There's absolutely no reason to dissolve it. But if Washington continues to thumb their nose at the American people, who knows what may come of that? But Texas is a very unique place, and a pretty independent lot to boot.—[5][6]

On April 19, 2009, the Amarillo Globe-News posted an editorial,[7] writing that Perry "uttered some words that take that discussion to a level not heard since, oh, 1861 - when Texas in fact did secede and joined the Confederate States of America. We all know what happened next."


Notions Capital pointed out this morning, and I would do so here as well, that the Alamo was inpart a fight over slavery between slave-owning Texans, and the government of Mexico which had an acknowledged claim to the territory, and which outlawed slave ownership - you know, FREEDOM. (Or as I sometimes think of it when I hear the word abused, Free-dumb):


The Texas Slavery Project examines the spread of American slavery into the borderlands between the United States and Mexico in the decades between 1820 and 1850. American slaveholders began migrating to the Mexican province of Texas in the 1820s, where they established a society like those developing at the same time in Mississippi and Alabama. Tensions quickly rose between these Anglo settlers and the government of Mexico, which repeatedly attempted to outlaw slavery in Texas. Settlers in the region eventually rebelled from Mexico in 1836 and established the Republic of Texas. From 1836 to 1845, slaveholders from the American South poured into this new nation between the borders of the United States and Mexico.

Centered on a database of slave and slaveholder populations in Texas during the Republic era (1837-45), the Texas Slavery Project offers a window into the role slavery played in the development of Texas in the years before the region became part of the United States.

Funny how seldom the role of slavery is recognized in the history of the Alamo; it is all about those glamorous American heroes holding off insurmountable odds, to preserve - that overused and abused word! - their freedoms.

The reality is distinctly different from popular history.  It should be no surprise that it Texas is the hotbed for a vigorous secession movement.  Or that the state of Texas has attempted to whitewash the heroes of the rebel side of the civil war in textbooks; failing that to simply disregard early American history entirely.  Per Gregory David Page, writing about the Texas Textbook war, teaching history,


TEA would also introduce new textbooks on the history of the United States that exclude all the founding years up until 1877, that's right, the part that teaches about our ancestor heroes and how they made us a great nation. That means our children will no longer learn how the Constitution was derived or any of the history of the Civil War.

As a writer and historian and better yet, as an American, I am appalled by such an idea and cannot imagine our school systems omitting this formative part of our culture and heritage. Don't they think it is an important base of our children's education, children who in all likelihood will find themselves one day serving this nation in some remote country like Afghanistan with a rifle in their hands and people shooting at them? Wouldn't it help their resolve to know they are keeping up with a tradition of defending their rights and the rights of others that goes back to the American Revolution?

How did we get here and how will it impact the future? One important loss will be the failure to teach our next generations about the mistakes that were made that no wants repeated. For example, not all our history includes examples that they can can look back on with pride. Let us not forget that the reason we fought the Civil War was to abolish slavery. Don't we want our children to learn that freedom does not come easily? Not just freedom for all races and all colors but freedom of speech and the right to own property. Are we no longer proud of the accomplishments of our founding fathers and mothers?

The Alamo, and the subsequent Civil War were about slavery, an abomination which showed no respect for the human rights, and the freedom, of millions of people.  The Civil War settled, permanently, the issue of secession.

The Alamo was an amazing battle between Santa Ana and the defenders of the Alamo, but there is a limit to how far this should be glamorized.  It was in many respects a stupid battle, in a badly chosen place for the defenders who would have been better to leave than fight.

Better rather to teach the actual, FACTUAL history of the location and the period, and to accurately remember the Alamo.  And to apply that knowledge to our current events and politics - unlike Texas Governor Perry.  Sadly, also unlike a segment of Texans and other southerners, who want revisionist history.
Posted by dog gone at 7:32 AM