﻿
﻿Given the repeated phrase that Governor Walker is intent on 'stripping' the unions of their collective bargaining rights, and claims that Walker is making a 'naked power grab', I could not resist. Walker is claiming collective bargaining relates directly to issues of taxation and revenues and balancing the budget,  reminding me of the most famous stripping, taxation protest figure from the mists of  history, Lady Godiva.

There is a modern festival celebrating this, in the original town where the historic event occurred, Coventry.  It is occasionally celebrated with a modern equivalent, a woman riding a motorcycle, naked except for her long hair (it is unclear if this includes wearing a helmet or not).  I think it would be hilarious if someone among the Wisconsin protesters picked up the idea, adapting it to the circumstances.  Perhaps.... an attractive individual with long hair (it could be either gender) making a protest ride in long thermal underwear, on a horse, or possibly on a cow, or a snowmobile, or better yet  - a Wisconsin made Harley Davidson - past the capital and news cameras.  Because, if you have ever watched Packer football fans, it IS possible to get people in Wisconsin naked, or near naked,  in cold weather, with the right motivation.  They're crazy that way.  The protesters have certainly tried a variety of other means of attracting the attention of the nation; this would certainly attract their cause a wider (pardon the pun) coverage. 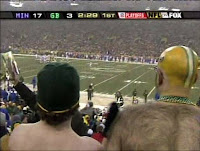 How is this appropriate to the Wisconsin issues?
There was an historic Lady Godiva, who 'flourished' according to historic sources, meaning we don't have more precise dates, approximately between 1040 and 1080.  According to the Domesday Book, she shows up in the old English form of her name, as the wife of Leofric, Earl of Mercia, with the spelling Godgyfu or Godgifu, meaning gift of god; Godiva is the latinised version of her name. 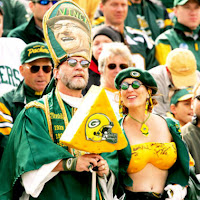 Gift of God, and Gifts TO God are parallels in this history to the rather lavish gifts given by Leofric and Godiva to religious institutions in the 11th century, similar to the very lavish dispositions of the special session tax benefits that Walker and the Republicans have given to corporations - including those organizations owned by the Koch Brothers in Wisconsin.  Lady Godiva's husband then tried to make up for his lavish expenditures by levying extremely heavy taxation on his tenants, the less affluent working class of that era, equivalent to union members of today.  When she challenged him on his taxation policies, he offered to abandon the crushing taxation if she accepted the dare to ride naked through the streets of Coventry.  She called his bluff - (and as the story has passed down from history, it also gave us the term peeping Tom).

Walker has been seeking not only current tax cuts for corporations, but has stated he hopes eventually to have no taxation on corporations, permanently, in the state of Wisconsin.  Lee Shepherd, Forbes Magazine author on taxation and finance, wrote about what Walker is trying to do in "Wisconsin's Cheesey Tax Cuts" in the February 15th, 2011 issue.

Is it possible to cut taxes while addressing a state budget deficit—leaving aside misguided folk belief in supply-side economics?

Wisconsin’s new Republican governor, Scott Walker, is cutting small business taxes while trying to reduce essential spending and threatening to prevent public employees from striking. The state has a budgetary shortfall of $3 billion over two years (Wisconsin budgets biennially). But Walker campaigned on creating a business-friendly climate, and called a special legislative session to enact his plans.

Walker just won legislative approval for the centerpiece of his tax cut plan, a supermajority requirement for sales or income tax rate increases. The new law does not prevent property tax rate increases or other tax adjustments like loophole closers. This is a dangerous restriction on legislative action in the long run, if for no other reason than it would be difficult to repeal.

States rely heavily on sales and property taxes to fund their budgets. Some do not have income taxes (Wisconsin does). Corporations pay a tiny percentage of state income taxes—smaller than their share of federal income taxes.

That is, he may ultimately succeed in giving away, to a different set of businesses and individuals, the $187 million of revenue that the 2009 enactment of combined reporting was expected to recoup over its first two years in effect. The entire corporate income tax in Wisconsin raises $630 million annually, accounting for 5 percent of the state’s total general purpose revenue of $12 billion.

Walker won approval of a program that would excuse relocated small businesses from part of their income tax liability by means of credits that can be carried forward to future years (presumably pushing the $67 million revenue cost forward as well).

What we have in the case of Wisconsin is a modest shortfall made seriously larger by tax cuts, rolling back tax reforms, and refusing to address significant tax loopholes, in order to give breaks to corporations, including major Republican donors.  And then to make up for that lost revenue, we have Governor Walker, and the Republicans, shifting the burden for those tax give-aways to the middle class, and using the manufactured budget crisis to hurt unions in the most damaging way possible - also to satisfy their big corporate donors.

So it would seem clearly that if there was ever an occasion for a dramatic, even legendary folk hero to come forward to support the ordinary every-day middle class citizens, and union members, of Wisconsin, it is now.  What better figure than a modern day Lady Godiva in a cheese bra, or a bare chested masculine version, to fill that role?
Posted by dog gone at 11:07 AM